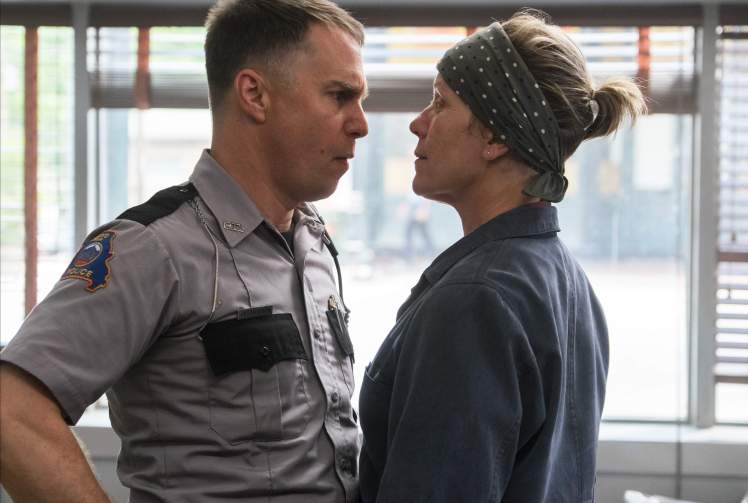 I watched Three billboards outside Ebbing, Missouri (2017), written and directed by Martin McDonagh. This is his third film as a director after In Bruges (2008) and Seven psychopaths (2012). After having read and heard good things about this movie (for instance, YourMovieSucksDOTorg considers it a good one), I went to the cinema with great expectations. What’s my opinion? The movie is… OK. Let me explain.

A number of things impressed me well. Frances McDormand (you surely remember her fantastic performance in Fargo, 1996) is outstanding in interpreting a tenacious mother looking for justice and vengeance, and this results in a multi-faceted character far from pure. A curiosity: the director admitted that he modeled her character on John Wayne of the classical western movies of the 60s and 70s. She is accompanied by Woody Harrelson which I always love (since Natural born killers, 1994, unforgettable movie written by Quentin Tarantino and directed by Oliver Stone). Here, Harrelson offers a great interpretation of a credible country sheriff. The third and last main protagonist is Sam Rockwell, who manages to be a racist redneck almost without any effort, and it’s impressive especially if you remember him for movies like  Moon (2009) or Confessions of a dangerous mind (2002). So, the main actors are all well directed.

The direction is also very good. I liked the director’s taste both in the scenes’ composition and in the fixed camera / moving camera / hand-held camera choices. No technique is used just to show off. For instance, the continuous shot of Rockwell visiting the advertisement company ran by Caleb Landry Jones leaves the viewer speechless, it is extremely powerful. And the initial shots are also well-made: with a couple of wide shots and a camera in McDormand‘s car, we perfectly understand where the movie takes place: a small town in the middle of nowhere in Missouri (by the way, there is no Ebbing in Missouri) in which a secret is a secret for no one and everybody murmurs about everybody else.

The premise is also interesting: how will such a small town react to the public display of its ‘guilt’, the guilt being the lack of justice for a homicide that took place seven months before? Is it possible for such a horrible crime to go unpunished in a place in which everyone knows about everyone?

So… why am I complaining? It seems that I liked everything! Well… not exactly. I think that the screenplay is extremely clunky. The script does a good job in defining the main characters, although is certainly weaker for the secondary ones like McDormand‘s ex-husband, like Peter Dinklage, and like the dentist (see below).  On the other hand, the comic relief which is the 19 years old girlfriend of the ex-husband is used well. In my opinion, however, the script really fails in the plot, which is full of events which are one less believable than the last. I know, this is cinema, so there is nothing wrong in that, right? Well… yes and no. And to me there is something wrong if the movie goes beyond the acceptable according to my suspension of disbelief. Clearly, the “acceptable” level is fully subjective, therefore what didn’t work for me may work perfectly for all of you. In fact, it seems that it worked for the vast majority of the public and the critics: RottenTomatoes gives this movie 87% and 93% respectively for the two groups. And the movie is winning a number of prizes! So, let me enter into spoiler territory to explain what I mean.

Two persons officially complain about McDormand‘s billboards with the sheriff. One of them is the dentist. We get this information and… in the next scene McDormand must go to the dentist! And what does he do? He tries to hurt her by extracting a tooth without anesthesia. So my question is: why? Ok, you may not like what she did with those billboards, but you’re still a dentist! I may even accept that she went there just because she was informed somehow of his complain and wanted to talk to him, but I found his behavior extremely far-fetched and only useful for the plot to go on with the McDormand-sheriff conflict.

McDormand goes out with Dinklage, and who do they meet? The ex-husband, of course! McDormand‘s daughter gets killed when returning home by walking precisely the day in which she argued with her mother and she denied her the use of the car. Incredible! McDormand and her son return home at night exactly when the three billboards are burning. Either ten minutes before or ten minutes later and they would have found either nothing wrong or the billboards completely destroyed, but nope! They arrive just in time to try to put out the fire! Rockwell enters the hospital heavily injured and is put in a two-bedrooms room with the exact person which he beat to death the day before. Bad luck! Dinklage walks in front of the police station right in time to provide an alibi for McDormand after she tried to burn the station down. Lucky her! A rapist from Idaho goes to a bar in Ebbing, Missouri, to talk with a friend about one of his misdeeds which resembles almost in every respect the one that took place in Ebbing seven months before. That same conversation is overheard by Rockwell, who was just in the same bar, alone, and one meter from the rapist. Amazing! The suicidal sheriff writes a letter to McDormand in which he foresees exactly what will happen to Rockwell a few days after his death: what a prophet!

I could go on, but I think that I made my point. I admit that my opinion about the movie has deteriorated in the days after I watched it, just by thinking about it. A friend of mine right outside the cinema defined it a bit cheesy, and now I must admit that I think that he was absolutely right. It’s still a good movie, certainly deserving a viewing. And if you don’t mind the stretched and far-fetched plot (which does not get better at the end, with the incredibly stupid choice made by Rockwell and McDormand, only slightly mitigated by their dialogue), you will enjoy it more than I did!