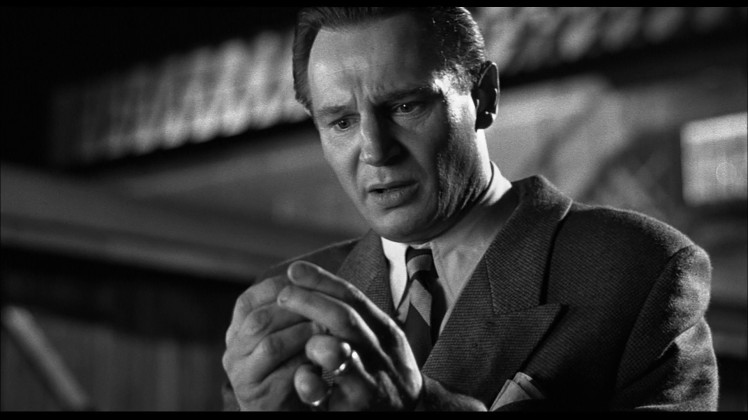 A few days after I saw The pianist by Roman Polanski I watched Schindler’s list, the 1993 movie directed by Steven Spielberg. It was interesting to see these two films one after the other for the partial story overlap, with Nazi-occupied Warsaw and the Polish Jews locked up in its ghetto. I even think that Spielberg paid homage to Wladyslaw Szpilman in a group dialogue scene in which one of the extras says that he is a musician and someone advises him to hide.

It seems useless to talk about the plot of Schindler’s list: everyone has seen it and it won seven Oscars. Like The Pianist, it’s a movie showing real facts without inventing anything, and I really liked how Spielberg didn’t portray the protagonist as a spotless and fearless hero, but rather as a normal person. Oskar Schindler (Liam Neeson) was a failed entrepreneur who exploited the war and the Jewish slaves to get rich, and only years after he started all that he developed a sense of guilt that led him to help the employees of his factory. Amon Goeth (Ralph Fiennes) is portrayed as an absolutely evil person and, judging from what the historians wrote, he was. Where I think that the (too) family-friendly Spielberg exaggerated is in the character of Itzhak Stern (Ben Kingsley), who seems be driven by pure altruism. From documents of the time, we know that first of all Stern was not the only one helping Schindler saving the more than a thousand Jews he saved, and second that corruption and extortion meant for many the difference between being on Schindler’s list and being out of it (and thus being doomed).

Then there are dozens of other characters (the film lasts more than three hours) which more or less we follow in the tragic years between 1939 and 1945 with their more or less interesting stories. Sometimes it is difficult to understand who’s who, especially because some characters disappear for big chunks of the movie and then reappear in different places and with slightly different appearances. However, Spielberg is very didactic, especially when compared to Polanski, and helps the viewer to follow the story with numerous on-screen notes explaining the various historical moments: the invasion of Poland, the construction of the Warsaw ghetto, the construction of the concentration camps, and the final order to send all the Jew prisoners to the extermination camps. And the ending is truly heartbreaking, with the survivors accompanying the movie actors while paying homage to the tomb of the real Oskar Schindler. Spielberg is a maestro and here he uses all his art to make the audience emotional, easily succeeding also thanks to the wonderful soundtrack by John Williams.

So, what do I think of Schindler’s list? I think that it should be seen by everyone, and I’m very happy to have done it. But, honestly, I don’t want to see it again, I surely preferred Polanski’s approach to the same subject (he has a wholly different sensibility, possibly because when he was 10 years old he managed to escape from the Warsaw ghetto during the Nazi occupation of Poland… ): raw, without frills, without extra layers of epicness. Ciao!