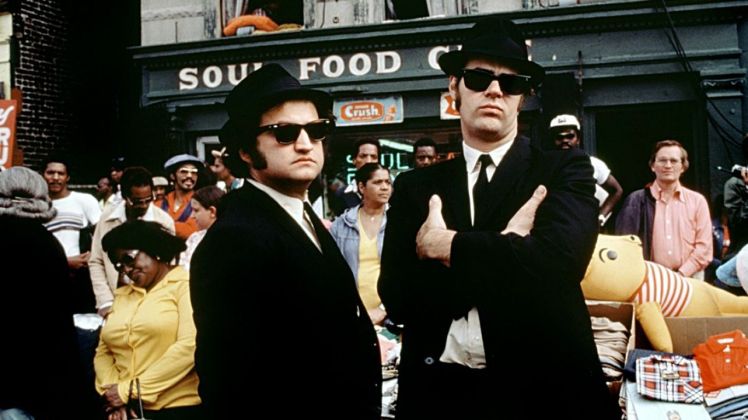 The Blues brothers is a 1980 film directed by John Landis starring John Belushi and Dan Akroyd. 38 years after its release we can definitively say that it’s a cinema masterpiece, both one of the best comedies ever made and one of the best musicals, if not the best of them all! It is worth dwelling on the fact that making the film was a huge bet, basically a folly: the idea came from a Saturday Night Live sketch (like for Wayne’s World in 1992); Landis had to fight with the producers who didn’t believe that a project with old and almost forgotten music stars could make a lot of money; working with John Belushi and his excesses wasn’t easy (he died in 1982 for a speedball overdose); and apparently the script written by Dan Akroyd, his first ever, was a disaster and Landis rewrote it almost entirely.

If you haven’t seen this film I cannot but tell you that you missed a masterpiece and that you have to do it as soon as possible. And now let’s talk (write) about it!

Here’s the plot: Joliet Jake (John Belushi) goes out of prison and his brother Elwood (Dan Akroyd) welcomes him outside. Together they visit the nun who raised them in the orphanage where Cab Calloway also works and they discover that, due to lack of funds, the place will close and both the nun and Calloway will be kicked out (en passant, Landis pays homage to Mario Bava with the nun going backwards as if floating before closing the door in front of the two brothers). Following the advice of Calloway, Jake and Elwood go to Mass at the church of Reverend James Brown and… Do you see the light? Jake understands that he has to put back together their rhythm and blues band to make the money necessary to save the orphanage. And so the two begin to recruit their old pals: one working in a luxury restaurant (How much for the women?); two more in the restaurant owned by Aretha Franklin (I’ll have some toasted white bread, please); a small group in a horrendous band (Murph and the magic tones. Look at you in those candy-ass monkey suits!)… To make it brief: it’s a series of memorable dialogues (I hate Illinois Nazis!) and of cameos by incredible musicians (think about Ray Charles at the record store, and John Lee Hooker in the street market!), the band returns together. But initially they struggle to find places willing to pay for them to play, that is until their memorable concert Palace Hotel Ballroom surrounded by the police. And the ending features the most incredible car chase of the history of cinema, with the brothers trying to get to the tax office to pay the orphanage debt.

The film has a wild rhythm that goes hand in hand with the rhythm of the music that our protagonists either play or listen to during the movie. From the comic point of view, everything is perfect: the band’s performance at the country bar, the brilliant idea of the Nazi enemies, the brothers’ savoir faire in the middle of complete chaos… it’s hard not to laugh when watching The Blues brothers. From the musical point of view, it’s hard to think of something better. And finally Landis also shows his virtuosity in directing a great action/road movie with amazing car chases both in highways and within Chicago (where as a tourist you can take tours retracing all the places where the film was shot).

In short, this film is a lucky combination of all the right elements: amazing actors, unique musical talents, an exceptional director in his best period (two years earlier he had made Animal house, and the year after he made An American werewolf in London), and an incredibly high budget for the crazy project it was. I don’t exaggerate if I say that I have seen this film at least thirty times, and I would of course recommend to watch the extended version contained in the recent DVD and Bluray versions. And stay away from the late sequel whose quality is light years away from that of the original movie! Ciao!