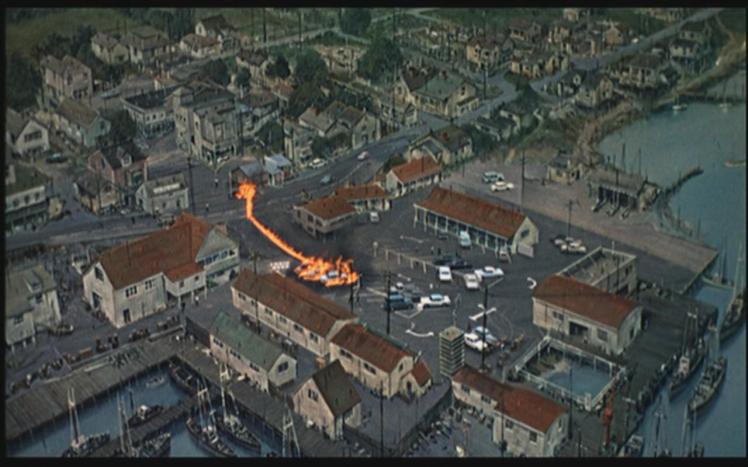 We all know that Alfred Hitchcock was a cinema genius, there’s no need to read it here on vengonofuoridallefottutepareti. But since the other day I re-watched The Birds, which he made in 1963 just after making Psycho (in 1960 – the three-years break is due to his television work), why not writing about it?

And let me tell you right away: I will refrain from commenting on the accusations made by poor Tippi Hedren (the protagonist of the film) who a few years ago in her biography accused the American director (who died in 1980) of sexual abuse. Tippi, who’s the mother of Melanie Griffith, rejected him during the making of the movie and it seems that she was constantly treated badly on the set. Above all, it seems that after working in Marnie (1964), Hitchcock ruined her career by preventing her from taking part in any other great production. With the #metoo movement and everything, I prefer not to enter into historical discussions about how past directors treated their protagonists (see Stanley Kubrick with Shelley Duvall in The Shining, 1980): it’s a delicate matter and extremely difficult to untangle!

So let’s talk about The Birds. Everyone knows the plot, I know, but here it is: the rich, famous, and silly Melanie Daniels (Tippi Hedren), practically an ante-litteram Paris Hilton, gets infatuated with a lawyer met by chance in a bird shop in San Francisco, Mitch Brenner (Rod Taylor). She follows him to Bodega Bay, a village 60 miles North of the city, where he spends the weekends with his mother Lydia (Jessica Tandy) and his little sister Cathy (Veronica Cartwright). Not only will the mother prove to be very possessive, but Melanie will be welcomed by a former girlfriend of Mitch, the local school’s teacher Annie (Suzanne Pleshette), who’s still in love with the handsome Mitch. And so far we are watching a romantic comedy.

Then, all of a sudden, a different film begins. And it’s a horror movie in which thousands of crows and seagulls begin to attack humans without any particular reason. The principle is basically the same as Robert Rodriguez’s From Dusk Till Dawn (1996), in which the characters don’t know that their world is populated by vampires until they are attacked by a bunch of them, or Predator (1987), in which the tough soldiers led by Dutch are unaware of being the targets of a very aggressive alien creature. But of course Hitchcock did it in the 60s! From the first birds’ attack to the wonderful ending, we the audience witness a series of moments of calm alternated with moments of frenetic action in which the bloodthirsty birds seem to be able to kill each and every inhabitant of Bodega Bay.

Hitchcock is a master of tension, and here it feels like the protagonists are constantly at risk of losing their lives. It’s impossible to know who will die next, and it’s impossible to understand how those who will save themselves will succeed in doing so. Sometimes I thought that I was watching a zombie movie, and it’s no accident that another maestro like George Romero came out with The Night of the Living Dead in 1968, five years after The Birds. The ingredients are similar: the enemies are numerous and almost impossible to defeat, the protagonists are barricaded in an isolated house, and there are various sudden and unpredictable deaths!

But it’s not just that! Hitchcock filled his movie with metaphors. For instance, the young Cathy saves her caged birds, and at the same time she’s also locked up in the cage of the possessive mother together with her older brother. Not to mention the return of the difficult mother-child relationship, as in Hitchcock’s previous movie Psycho! And there are even those who read in the character of Melanie the disturbing element that manages to separate three women from Mitch (Lydia, Cathy and Annie), three women whose revenge is symbolized by the attacks of the birds! In fact, the locals openly accuse Melanie of being the cause of this inexplicable event…

Ok, it’s a great movie. But is it without flaws? No, it isn’t: as in most movies, some flaws can be found. Sometimes the characters do totally stupid things, like letting the kids out of the school which is literally surrounded by ravens, or like Melanie deciding to enter and shut herself in a room where she hears the noises of hundreds of birds. The same Tippi Hedren asked the director why her character should have done that and he simply answered: “Because I tell you to do so”. Not really the best justification plot-wise… And the special effects have not aged very well, but it’s been over 50 years!

But these are but minor details. The Birds is a great movie, and it would certainly have been interesting to see the alternate ending, written but never filmed, with a final attack on the car with which the survivors leave Bodega Bay. Ciao!

11 risposte a "The Birds: Movie Review"