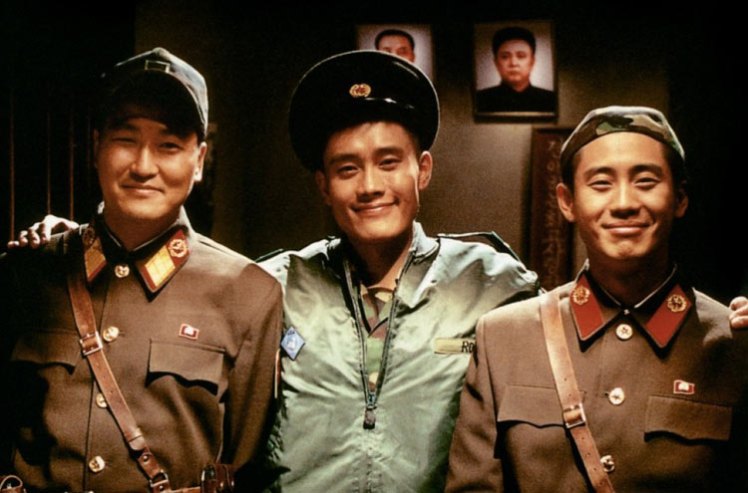 Gongdong gyeongbi guyeok JSA, more commonly known with the shorter international title Joint Security Area, is the third film by Korean director Chan-wook Park. Released in 2000, it made him famous all over the world before he made the fantastic trilogy on revenge which began with Sympathy for Mr. Vengeance (2002) and ended with Sympathy for Lady Vengeance (2005), with the masterpiece Oldboy (2003) in the middle. What is Joint Security Area about, and why was it so important for Chan-wook Park?

In Joint Security Area we follow an investigation conducted by the Swiss Army Major Sophie E. Jean (Lee Young-ae), of a family of Korean migrants. She has to find out what happened at the border between the two Koreas a few days before, when two soldiers of the Northern Army died. The problems arise from the fact that there are two conflicting versions on the incident: a South Korean soldier, Sergeant Lee Soo-hyeok (Lee Byung-hun) claims to have been kidnapped by those who then he managed to kill to be able to return to South Korea. On the other hand, Sergeant Oh Kyeong-pil (Song Kang-ho) of the Army of North Korea swears that Soo-hyeok stormed the compound where he stayed with his two comrades and managed to kill them before going back to where he had come from. Where is the truth?

Joint Security Area is certainly a thriller with a halo of mystery with an absolutely intriguing premise. We follow the investigation of Jean, we understand her logic, we see the flaws in the two versions of the facts told by the witnesses. And then we discover the truth through long flashbacks that reveal a reality that we could have never expected. But I stop here on the plot: since I suppose that not many have seen this film, I will of course avoid spoilers in order not to ruin the vision to anyone.

The only thing that I would like to emphasize is that I think that Chan-wook Park wasn’t too interested in the thriller/mystery side of the story. So much so that he chose to reveal it up to the smallest details once the flashback scenes start! The surprising part of this film is that it’s about friendship, about human relationships, in this case between soldiers, who, although on opposite sides for old and forgotten reasons, at the end of the day they are very similar to each other. It is a film about brotherhood, and the fact that it’s such a tragic story suggests to me that it was an attempt by Chan-wook Park to awaken his compatriots and make them change their opinion on considering the war with their brothers in the North as something normal. I like to think that the director wanted to send a strong political message through such a personal and human story. And perhaps it is no coincidence that the film was filmed in a period of rapprochement between the two Koreas, culminating with the summit of Pyongyang between Kim Jong-il and Kim Dae-jung in June 2000.

As for the rest of the movie, it is shot and photographed very well, as it seems normal for a director like Park. His last effort too, Ah-ga-ssi (The handmaiden) which came out in 2016, is a joy for the eyes, maybe even too much (it seemed to me all style and little substance when I saw it at the cinema, but I have the Bluray there ready to be watched so I could change my mind!).

If you haven’t seen it, watch Joint Security Area, you won’t regret it! It was a great success in South Korea when it came out in theaters, it seems that it was the first South Korean film not to depict the North Koreans as crazy and blood-thirsty enemies, and it will surely keep you glued to the screen from beginning to end! Ciao!