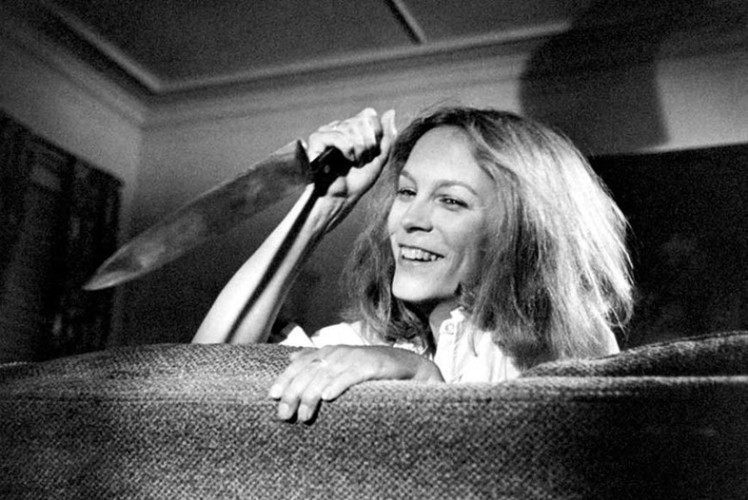 And for the 250th time I have watched Halloween, the 1978 film directed by John Carpenter and starring Jamie Lee Curtis (she was 19 year old at that time!!!). This should already say something about what I think of the movie: it’s an incredible unrivaled masterpiece that should be watched and re-watched all the time. I hope we all agree on this.

Here’s the plot in a nutshell: little Michael Myers is locked up in a psychiatric hospital after killing his sister, but after fifteen years he escapes and leaves a trail of corpses in Haddonfield and surroundings. It’s up to the young Laurie (Jamie Lee Curtis) and Dr. Loomis (Donald Pleasence) to stop him on Halloween night, although being Myers the incarnation of evil, it won’t be easy.

I suppose that everyone knows that Halloween is considered the father of modern horror (and in particular of the slasher sub-genre), even if the modest Carpenter has always said that in reality Psycho by Alfred Hitchcock (1960) deserves that title. Not surprisingly, Halloween stars Jamie Lee Curtis, the daughter of Janet Leigh (and two years later Carpenter used them both in The Fog)! Before Halloween, horror was synonymous with movies with werewolves, vampires, and castles in the fog. In 1978, the horror genre as we know it was born (even if credit should be given to George Romero who directed Night of the Living Dead in 1968!).

Halloween was so innovative that virtually all filmmakers who subsequently ventured into horror films have used, or tried to use, almost all of its elements: young protagonists with realistic dialogues and with which it’s easy to identify, an unstoppable murderer of few (zero!) words, some jumpscares here and there accompanied by sudden and loud noises, a memorable and immediately recognizable theme, and an ending open to one or more sequels (that of sagas in horror cinema is almost a curse, even if some are good).

And here I don’t want to repeat things that everybody knows already. For example, that the film was produced on a ridiculous budget (just over 300,000 dollars), but it earned more than 70 million dollars worldwide at the box office. Or that it was filmed in spring and the dry leaves that you see on the street were brown-painted leaves that the crew members and the actors themselves recovered at the end of every scene: due to the low budget, they couldn’t waste anything. Or that Dr. Loomis’s resigned expression when looking out the window knowing he wouldn’t see Myers’ corpse below was Donald Pleasence’s idea, while Carpenter had asked him to make a startled expression at first. Or that the main theme of the soundtrack is in 5/4 to make the atmosphere “unbalanced” and disturbing. Or that the introductory subjective long shot of the very young Michael Myers is one of the most iconic sequences in cinema history. Or that Myers’ mask was a one dollar Captain Kirk mask with removed eyebrows and painted white. There are infinite anecdotes about the creation of this film!

I would like simply and briefly to emphasize that the Bluray edition of Halloween is awesome. There are three documentaries in it (two are one and a half hour long), as well as some scenes that eventually didn’t make it to the final cut of the movie. I found particularly interesting the scene with Dr. Loomis discussing with the psychiatrists the level of security necessary to keep Michael at bay, and the one in which Laurie lends clothes to her friend Annie, played by the same Nancy Kyes we had already seen in Assault on Precinct 13.

But let’s get back to the documentaries, which all deal with the making of the movie: the initial idea, the 21 days of shooting, the following six months spent in the editing room, and the reception when it finally came out are all aspects that these three documentaries deal with in an extremely interesting way. The documentaries were made in 2010 (in fact one ends with a discussion of the remake directed by Rob Zombie), in 2003, and in 2000, and all feature interviews made mostly, but not only, from 1999 onwards. Each one is more interesting than the other (although many things are repeated). I discovered, for instance, that the executive producer Irwin Yablans: 1) had the brilliant idea of ​​using the name Halloween that until then had never appeared in any movie title; 2) contracted John Carpenter who promised to make the film for 300,000 dollars (a ridiculously low budget) for a fee of 10,000 dollars, 10% on revenue (the guy was smart), and complete control over the creative process and the final cut; 3) got money from the producer Moustapha Akkad with a clever psychological trick.

And then I found out how an independent film that cost so little looks like a great production in terms of image quality and sound: Carpenter spent most of the budget in Panavision lenses of excellent quality, in renting the Goldwyn studios for sound mixing, and in a Panaglide that had only recently entered Hollywood (most notably it was used in Rocky, 1976, for the dynamic close-up shots of the fights). Carpenter used it for his long shots in the streets of Haddonfield and, of course, in the initial scene: a four minutes shot obtained by walking non-stop with a 30 kg camera, the operator suffered a lot!

And so many other things! For example, did you know that Donald Pleasence accepted the job only because his daughter, a musician, liked the soundtrack of Assault on Precinct 13 made by Carpenter? And did you know that Halloween was smashed by critics when released, and Carpenter assumed it was a failure and moved on to make a TV movie (Elvis, where he met Kurt Russell who would then be the protagonist of a lot of his movies), until a couple of positive reviews (one by Roger Ebert) and an incredible word of mouth radically changed the fate of the film? And so on…

If you are curious, don’t hesitate and buy the Bluray, you won’t regret it. This will also allow you to watch at least one hundred and seventy times this film, as you should! Ciao!

PS: but… have I already written that I met John Carpenter? Sorry, I cannot help but repeat it every time!