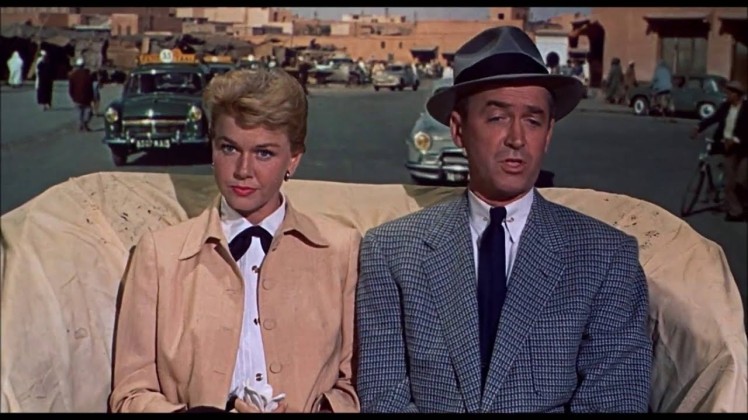 Let’s be clear right away: I’m about to talk about the 1956 movie, not the 1934 one. The director was the same, but the first film was defined by the director himself as the product of a talented amateur, and the second the movie made by a professional. This eponymous remake of The man who knew too much is one of the most famous films directed by the master Alfred Hitchcock (in the blog I’ve written about him for The birds, 1963, and To catch a thief, 1955). With James Stewart and Doris Day as protagonists, it was released in 1956, a couple of years before the equally famous Vertigo (1958) and a couple of years later than Rear window (1954). We’re talking about one of the greatest of the seventh art, so no one should be surprised by the incredible number of masterpieces made by the English director in such a short time.

The man who knew too much is simply a perfect thriller. The typical American family coming out of the American dream on holiday in North Africa remains involved in an international intrigue and the only son of the couple Stewart – Day is kidnapped by unscrupulous criminals. Will the two parents be able to save him, and at the same time also to defeat the evil plans of the shady felons? But… what terms am I using? Speaking of a film from the Fifties, it seems natural to use a language consistent with the canons of the time…

The first part of the film takes place entirely in Marrakech where Hitchcock proves to be perfectly capable of handling the most varied outdoor shots, although he hated doing it and preferred to work in sets where he could easily control everything and everyone. In Marrakech, both the protagonists and other important characters of the film are introduced such as the French Louis Bernard (Daniel Gélin) and the couple of tourists formed by Lucy and Edward Drayton (Brenda De Banzie and Bernard Miles). This first part demonstrates how all the roles had been written and thought out intelligently. For example, we cannot but marvel at the relationship between James Stewart, a good-natured American on vacation but at the same time a doctor and veteran of World War II, and Doris Day, blonde and beautiful but not naive at all. And another great character is Bernard, whose intentions we don’t fully understand until the end.

In the second part, the film moves into an inhospitable London in which our protagonists move in a hostile world in which not only are they facing the criminals, but also the authorities which seem ready to endanger the life of the young hostage in order to thwart the international intrigue.

But the phenomenal aspect of the film is how Hitchcock’s mastery allows him to stage such a dark and dramatic story with an incredible range of languages ​​and emotions. Humor is omnipresent: in the brilliant dialogues between Stewart and Day (the screenplay is by John Michael Hayes, collaborator of Hitchcock also in the already mentioned To catch a thief and Rear window), in the Moroccan restaurant scene, in the taxidermist shop, in the scenes with the friends of her in constant waiting in the London hotel… lots of laughs! And at the same time there’s tension! The long concert scene, without dialogue, is a thriller masterpiece, not to mention the embassy reception with the song sung by Doris Day on the piano… so tense! On the other hand, there’s a reason why Que serà serà has become an iconic song in the history of cinema (and music)!

In short, The man who knew too much is really a wonderful movie. Intriguing plot, intelligent script, perfect actors and acting, unforgettable music, fine direction… absolutely worth seeing! The only thing that shows that the film is more than sixty years old is the joke about the son who should have the intelligence of the father and the beauty of the mother, which feels out of place especially because the character of Doris Day is anything but stupid! ciao!

3 risposte a "The Man Who Knew Too Much: Movie Review"