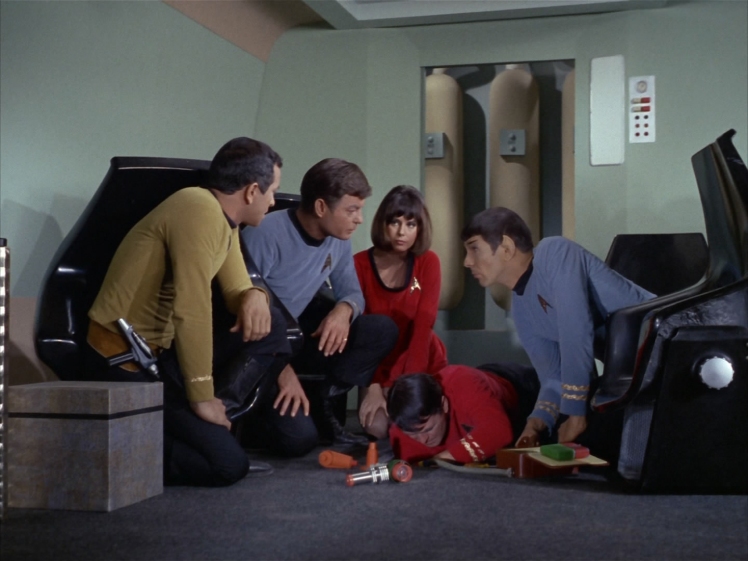 The sixteenth episode of this first season of Star Trek (aired for the first time on January 5th 1967, I did my homework) offers us a “first time”: it’s the first time that one of the shuttles is lost, a recurrent plot device in later series such as, for example, Voyager. The shuttle in question is called Galileo and gives its name to the episode: The Galileo seven.

The USS Enterprise is bringing medical supplies to the distant Makus III colony under the supervision of High Commissioner Ferris (John Crawford). On the way, it encounters a quasar-like phenomenon that Captain Kirk decides to investigate closely despite the Commissioner’s mumbling, he would rather get to their destination quickly. Kirk sends Spock along with six other crew members, including Dr. McCoy, Lieutenant Commander Scott, little-dressed Yeoman Mears (Phyllis Douglas) and Lieutenants Latimer (Rees Vaughn), Gaetano (Peter Marko) and Boma (Don Marshall). But things don’t go well: for unclear reasons, the shuttle is irresistibly attracted to the planet at the center of the quasar (Taurus II), and it’s so damaged that it’s impossible for it to take off. What’s more, soon after the stranded crew discovers that the planet is inhabited by hostile giant and primitive beings that don’t hesitate to attack them!

So, on the one hand we have Kirk who does everything in his power to find the lost Galileo, resisting the pressing Commissioner Ferris who cares about the fate of the colonists of Makus III, far more numerous than the seven members of the Enterprise crew. On the other hand, Spock is in command of the group of explorers who must face the following challenges: the difficult repair of the shuttle; the hostile native creatures; the almost mutiny of several of his subordinates. In fact, the theme of the episode clearly focuses on the use of logic and the opportunity to have a person without feelings at the helm. A theme, therefore, that will be revisited over and over again in the Star Trek universe, not least when Data will be entrusted with the command of Sutherland at the beginning of the fifth season of The Next Generation.

The cold-heartedness of Spock in calculating how many crew members will have to be sacrificed in order to reach the right weight to allow the shuttle to go into orbit makes the three lieutenants very angry, as they know that they would be the ones to be abandoned on the inhospitable planet. Fortunately, the giant apes kill both Gaetano and Latimer in the most typical red shirt fashion (such predestined victims appear in almost every episode) of Star Trek. Spock makes several other mistakes in his strict application of logic, such as thinking that the planet’s inhabitants would react rationally to phaser warning shots.

In short, let’s face it: even if the episode criticizes logic as the only principle to follow and puts in good light the human ability to improvise (the thing is obvious when Spock saves the day in the finale with a potentially disastrous action for the occupants of Galileo), in reality there’s very little logic in the actions of the half-Vulcan. But if we forget these weak points of the plot (and if we go beyond the ridiculousness of the fight scenes on the planet), this is still a solid episode with excellent dialogues, a magnificent Leonard Nimoy and a great James Doohan in the role of Scott who stands out more and more as an important member of the crew. Ciao!

PS: on the other hand, forget the ending where everyone on the bridge laughs out loud thinking about what happened despite the fact that two crew members died due to Spock’s incompetence…

Next episode: The Squire Of Gothos