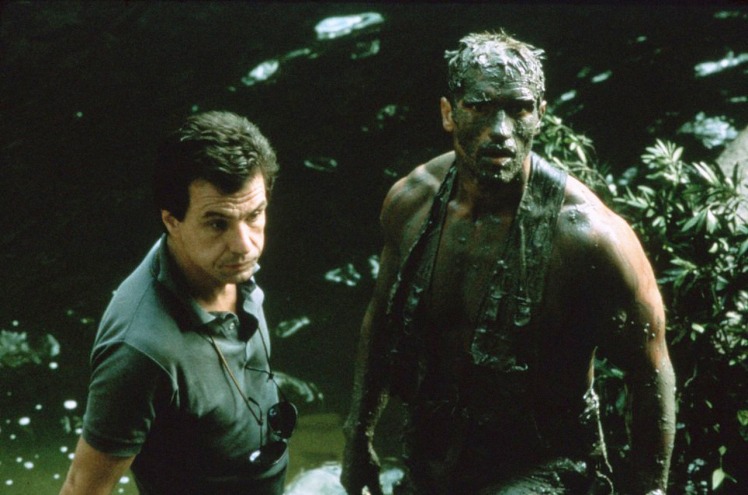 The filmography of director John McTiernan could be defined with the expression “few but good”. Not because he carefully chose his projects and made them with an obsessive attention to details like Stanley Kubrick did. But simply because as long as he worked, he worked well. Then they put him in jail and he stayed there for several years, and since he came out a few years ago still no one dared to get him back behind the camera.

Among all his movies, today I feel like writing about Predator, from 1987. Despite the fact that a brief description of the film may suggest an awful 80s’ b-movie, McTiernan managed to shoot a true scifi/action masterpiece. The plot is the following: Dutch (Arnold Schwarzenegger) is the leader of a (para)military team that is sent to a forest in Latin America to save some people who are hostage to unspecified guerrillas (also helped by the obligatory evil Soviet agent). There, he finds an alien who kills his squad one by one until Dutch is the last remaining member and has to fight the alien to the death. How McTiernan managed to shoot a masterpiece with this story is something I’ll try to explain below.

First of all, both McTiernan and his collaborators were at the top of their game, which means that this movie is technically astonishing. The soundtrack is by Alan Silvestri, who now makes scores for Marvel cinecomics, but mainly he’s the one behind the music of most Robert Zemeckis’ films including, of course, the three Back to the Future. And Stan Winston made the special effects: he owns four Oscars and his curriculum includes movies like The Terminator, Terminator 2: Judgment Day,and Aliens (all by James Cameron) and Steven Spielberg’s Jurassic Park.

Then, despite the film pertaining to the genre of 80s’ muscle movies full of one-liners and starring the various Stallone, Lundgren and Schwarzenegger (who are now popular again playing unlikely 60-years old heroes in movies like The Expendables saga), here the muscles do not serve any reactionary plot praising private revenge and Reaganian individualism. On the contrary, the muscles in Predator mostly condemn you to certain death! Dutch is forced to use intelligence and cunning to defeat his enemy in the final duel, while his companions all muscle and little brain get wiped out fairly quickly.

But the thing that makes Predator a masterpiece of the action/science fiction genre is how McTiernan managed to characterize well the human characters well while showing the alien little by little. In fact, the Predator itself is absent from most of the movie (a bit like the shark in Jaws, and the xenomorph in Ridley Scott’s Alien). For the first half hour it’s a pure war movie, with Dutch and his soldiers reaching the guerrilla camp and killing all the “bad guys” unharmed. Then, for another half hour the members of the group die one by one at the hands of the Predator without even being able to see it. And then during the finale with its one-against-one duel the monster is revealed in all its beauty, so to speak. Of course, we the audience are aware of its presence since the beginning due not only to the initial sequence of the spaceship’s arrival, but also to the subjective shots of the monster following Dutch’s team and with the brilliant infrared vision which has been a characteristic of the Predator ever since. This was such a clever idea to create expectations, tension, and to introduce the antagonist who takes center stage only in the last act!

And what a last act! The Predator is really scary, it has much more advanced weapons than the US army, and moves while invisible on the tops of the forest trees. He’s merciless and stops at nothing, which is also a perfect description of Spielberg’s shark, Cameron’s Terminator, and Scott’s xenomorph, that is some of the best monsters in modern cinema!

In short, this is a film that can be easily seen multiple times. The special effects are amazingly beautiful (both those of the Predator and those of the firefights with abundant fake blood splashing everywhere). The dialogues are amusing and manage to define perfectly the personality of the various secondary characters: Billy (Sonny Landham), Dillon (Carl Weathers), Mac (Bill Duke), Blain (Jesse Ventura), Poncho (Richard Chaves), and Hawkins (that same Shane Black who directed the most recent film with a Predator in it, that is 2018’s The Predator). All the one-liners work great: just think of “You’re bleeding.” “Ain’t got no time to bleed.” “Got time to duck?“, immediately after throwing a series of bombs close by. Just brilliant. It’s such a payoff when all these big and cocky soldiers meet their ugly end! and then Dutch avenges them all!

I could go on for hours, but let me stop here with a recommendation. The Making of Predator is a beautiful documentary, which can also be found on Youtube, and contains endless curiosities about the film. Above all, naturally, I recommend watching the film to those who have never done it! Ciao!

PS: needless to say, this film has generated an infinite series of products such as movies (sequels, spin-offs, and cross-overs), comics, books, videogames, and puppets! We’re talking about a milestone in pop culture!