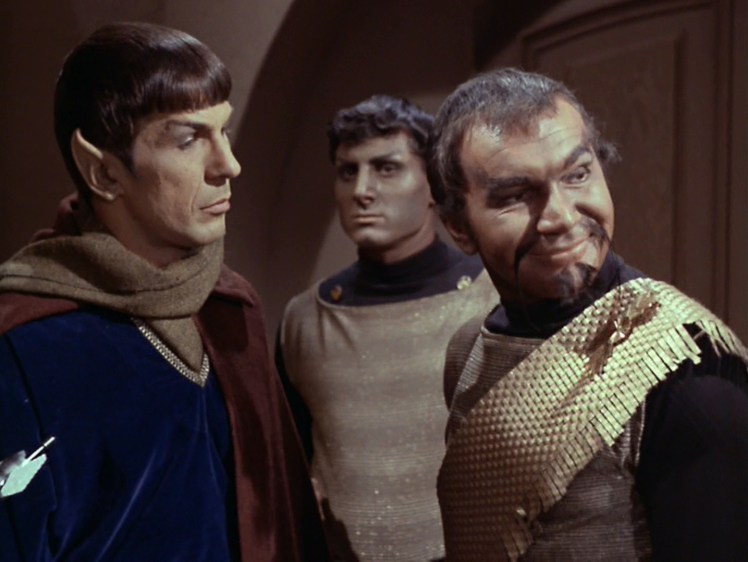 At long last, the Klingons! Here come perhaps the most iconic aliens of the whole Star Trek Universe, though, come to think of it, this is probably true only thanks to the films with the crew led by Captain Kirk and the series The Next Generation. In any case, Errand Of Mercy expands the mythology once again with the introduction not only of a new race, the Klingons, but also with the their war against the Federation.

The USS Enterprise is sent to the planet Organia in view of an imminent start of hostilities between the two factions: apparently, peace negotiations are failing. Kirk’s mission is simple: take possession of the planet before the Klingons do. Organia has a high strategic value due to its position in the quadrant. But there are two problems: 1) the planet is inhabited; 2) the Klingon fleet is heading towards Organia to conquer it.

The Enterprise arrives first and when Kirk and Spock teleport to the surface they find a population that doesn’t even want to hear about the war between the democratic Federation and the Klingon empire. Kirk gets angry explaining that the Klingons would establish a military dictatorship, that they would deprive the inhabitants of the planet of all freedom, but nothing, the Organians are immovable with their idiotic smiles.

And when the Klingons do arrive, led by the brutal Kos (John Colicos), they actually impose rules not too dissimilar from those of the Nazi-occupied territories during World War II (for example, for every Klingon killed, 200 natives will be executed). Kirk is determined to do something and performs an act of sabotage with Spock, then tries to stir the population, but nothing…

Until it is discovered that the Organians aren’t simply a peaceful and rural civilization, but rather a superior and incorporeal race evolved over millennia that with its mental powers eventually cancels the war and prevents any violent act deemed as unacceptable and stupid.

So, here we go again (the situation is very similar to that of Arena, for example), the message that is strongly reiterated here is always the same: war is not the solution and must be avoided at all costs. Except that in this case the lesson is not taught by Kirk, but by superior beings who notice the stupidity of humans and Klingons portrayed here as capricious children. The Organians basically take away their toys, their weapons, with which they want to hurt themselves.

Even if the story clashes a bit with that of A Taste Of Armageddon, the episode in which Kirk demonstrated the stupidity of war to the inhabitants of Eminiar VII, once again the pacifist message goes through. The key scene is the three-way argument in which Kirk, Kos and the leader of Organia Ayelborne (John Abbott) argue and the two enemies support each other to defend their right to wage war. That paradox is perfect to demonstrate the stupidity and uselessness of armed conflicts.

Errand of Mercy is therefore an episode with an intelligent theme in which, however, the characterization of the Organians doesn’t work too well. They do nothing but smiling for 40 minutes and then they solve everything with no effort whatsoever. Such powerful beings could have understood immediately what had to be done and do it! But if they had done so, we couldn’t have enjoyed 50 minutes full of Klingons and the dense conflict between Kos and Kirk. The latter’s hatred towards the Klingons (so prominently featured in Star Trek VI: The Undiscovered Country) was born here!

And do we want to talk about the Klingon look? They are men painted in black with long thin mustache and goatees… let’s face it, they look a bit ridiculous. Let me praise the work done in Star Trek III: The Search For Spock for having introduced the modern make-up without radically abandoning the original idea! And think about Worf in The Next Generation wearing a baldric similar to that of Kos, for example. In short, this episode adds another idea (which gave birth to a thousand Star Trek stories) to the long list created during this first season of The Original Series by Roddenberry and colleagues. Ciao!

Previous episode: The Devil In The Dark

Next episode: The Alternative Factor