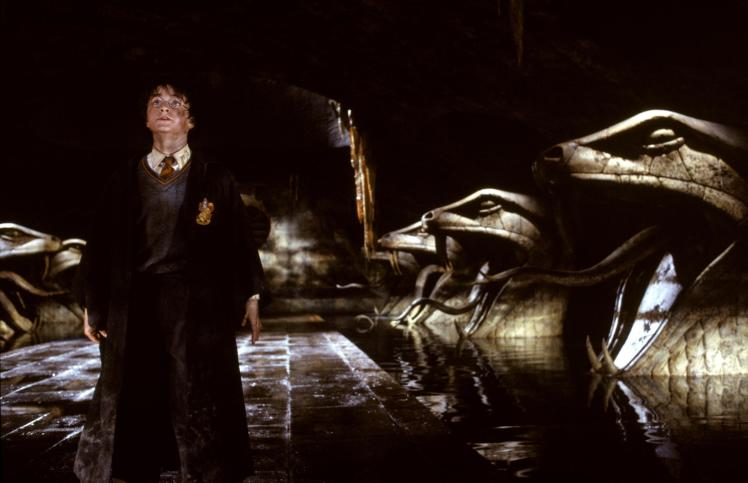 A year after the first film of the saga of the wizard with the most famous scar in the world, Chris Columbus came back to direct Harry Potter and the Chamber of Secrets (2002). As for the cast, the only noticeable difference from the previous film is the introduction of the new professor in Defense Against the Dark Arts, Gilderoy Lockhart played by a delightfully over-the-top Kenneth Branagh, and of the father of Draco Malfoy, Lucius, played equally well by Jason Isaacs. For the rest, the various Radcliffe, Grint and Watson were confirmed, as well as the group of veterans Richard Harris, Maggie Smith, Alan Rickman and all the others. Don’t change a winning team, right?

In this second film there are all the positive elements of the first, as well as a few (as far as I am concerned) negative ones. The atmosphere is once again fantastic, well built and maintained throughout the film. The soundtrack, the actors, the special effects, the sets, the costumes… they’re all impeccable! The tone of the story is more obscure and you can tell by the considerably less bright cinematography and by the choice of having many night scenes. Once again the production looked for places and buildings all over the United Kingdom to recreate a unique Hogwarts, and… mission accomplished! Only towards the end of the saga the choice will be made to use more consistently the Warner Bros. Studios in Watford, near London (needless to say, I visited them and it was a wonderful experience!!!).

What’s going on with young Harry this time? His second year as an apprentice wizard is characterized by a series of accidents demonstrating how dangerous it is to study at Hogwarts. Apparently, the Chamber of Secrets has been opened and anyone who’s an enemy of the elusive Slytherin heir must be on the look out! And given that Lockhart, theoretically an expert in the defense against the dark arts, looks like a crook, once again it is up to Harry and his friends to save the day. This leads them to discover fifty-year-old things that still have serious consequences for Hogwarts and the whole magical world: why didn’t Hagrid finish his studies? And who’s the mysterious Tom Marvolo Riddle? And the Slytherin heir? But, above all, where’s the chamber of secrets and what does it hide?

And not only that! Here come a house elf, Dobby (voiced by Toby Jones), the giant spider Aragog (voiced by Julian Glover), and poor Moaning Myrtle (Shirley Henderson). Chris Columbus decided once again to sacrifice the daily lessons, the exams, the quidditch tournament, and the houses’ competition in order to advance the plot. My thoughts about this movie are similar to those I have for Harry Potter and the Philosopher’s Stone: it’s a good transposition to the big screen of a wonderful book (reviewed here on Squared’s book reviews), nothing more. It does a good job of extrapolating a captivating story from Rowling’s book, sacrificing a bit of the setting to get to the essentials, and it manages to deliver a complex and compelling finale.

I remember that at the time it came out, the movie was criticised quite a lot for its ending which wasn’t fully understood, but in my opinion Columbus couldn’t do anything better. The ending can be fully understood only after reading the seventh book (or seeing the last two films)! J.K. Rowling hadn’t written that book yet when this film came out, but she did have in mind the main plot elements, and in hindsight (that is, after finishing the saga) I think we can only marvel at a story which shows great consistency from beginning to end. What else?

Ah, yes, I ‘ve something else to say but I’m entering spoiler territory, so if you haven’t seen the movie maybe skip this little paragraph. I love the detail of Lucius Malfoy who in Diagon Alley picks up a book from Ginny Weasley’s bag (Bonnie Wright) and puts two back! This is on screen for less than a second but it shows how much attention to small things was put into the making of this movie! The same goes for the final dialogue between Dumbledore and Lucius Malfoy in which the former makes it clear without saying it out loud how the headmaster perfectly knows who gave Tom Riddle’s diary to Ginny. Needless to say, poor Richard Harris (poor because he died a few weeks before the release of the film) did a great job! On the other hand, I didn’t like at all the fact that Malfoy tries to kill Harry with an Avada Kedavra after the release of Dobby, I found it to exaggerated and too different from the book!

But these are small details. In my opinion, Columbus has given the world two solid chapters of the saga which he directed with a confidence and professionalism. In order to make a qualitative leap maybe another director was needed, perhaps coming from a different type of cinema… who knows what could happen with the third chapter in the hands of a different director, right? Wink, wink! We’ll find out soon! Ciao!

6 risposte a "Harry Potter and the Chamber of Secrets: Movie Review"