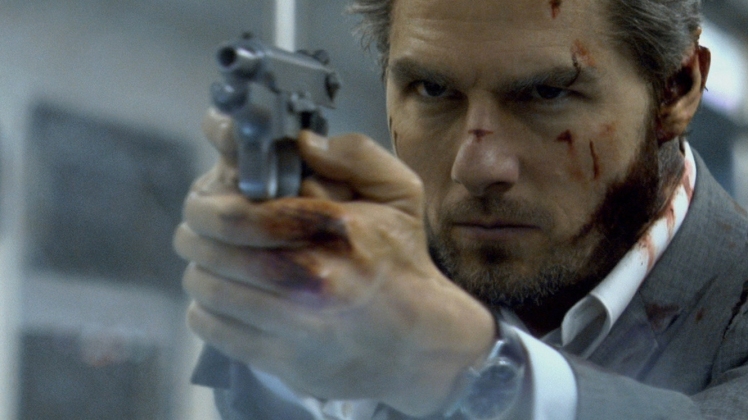 I finally managed to watch Collateral, Michael Mann’s 2004 film (here’s why it took me a while)! Michael Mann knows how to shoot action movies and he’s also one of the few experienced directors who really embraced the digital technology. In fact, Collateral is his first attempt to give life to a new style instead of trying to recreate digitally what was achieved with traditional film (Danny Boyle did something similar in 2002 with 28 Days Later). How? By shooting the whole film at night: when there’s little light it ‘s difficult for traditional non-digital camaras to capture the images, so Mann decided to shoot in digital in order to do something new. And what about the result?

This is a great movie. Michal Mann gives us ten minutes of breath at the beginning in which he introduces the character of Max (Jamie Foxx, who had already collaborated with the director in Ali three years earlier and will do it again also in Miami Vice two years later), a taxi driver in a Los Angeles which has rarely been so spectacular. Then, as soon as Vincent (Tom Cruise) shows up, the rhythm becomes tense in a crescendo which only ends an hour and fifty minutes later. The dialogues are all sharp and well constructed (the screenplay is by Stuart Beattie, who would never write anything remotely like this in his career afterwards), the plot develops well despite the fact that at a certain point things get a bit complicated with both policemen and Feds (Mark Ruffalo is great in this), and except for a scene that I didn’t like, the movie is an incredible ride to its tight finale.

The main protagonists are perfectly characterized by their words, their actions, and their movements. Max is a perfectionist to whom life has given little, he’s a loser with a dream that in his heart he knows it will never come true. Vincent is a ruthless murderer who likes to think of himself as a philosopher in order to avoid collapsing under a huge sense of guilt. The interactions between the two are spectacular and it’s thanks to them that the film takes off (and to think that Mann wanted Adam Sandler as the taxi driver, I don’t even want to imagine it!). And look, I hardly like Tom Cruise in a movie, but he’s really good here!

The soundtrack is brilliant, composed almost entirely of existing songs (Groove Armada, Miles Davis, Calexico, Audioslave…) accompanying the metropolitan journey of Vincent and Max from start to finish. Only during the final part there’s room for the instrumental parts written by James Newton Howard. The final twist is brilliant and it’s not the result of a simple coincidence (who would believe in a coincidence in a city of 16 million inhabitants?), rather it’s part of an extremely well-conceived plot (Beattie had been working on it since 1989, apparently). To sum it up, I have only one thing to complain about.

The scene in the Fever club. Why? That’s the climax of the action, the place where Max and Vincent meet the heads of the criminal organization, the Feds, the detective… and it’s shot with with dozens of extras! How can I complain about it? I’m complaining about one specific thing: the sound. Theoretically, in the club there’s loud music, a music that we hear throughout the scene. So, why is everyone capable of talking to each other normally, and even whispering? And how come Max and Vincent hear the Feds shouting from across the room? Has Michael Mann ever been to a discotheque? Obviously, the scene wasn’t shot with music, but it would ‘ve been nice to take into account its presence when directing the actors and their dialogues… maybe it’s not a big deal, but it ruined the scene for me!

For the rest, as mentioned, this is an astoundingly beautiful film. The soundtrack, the direction, the cinematography, the construction of the scenes, the action, the tension, the characters… everything is top notch, everything works, it’s impossible to get distracted even for a second. There are multiple memorable dialogues (one above all: how did Miles Davis learn to play?), and unforgettable scenes. This has infinite replay value, ciao!