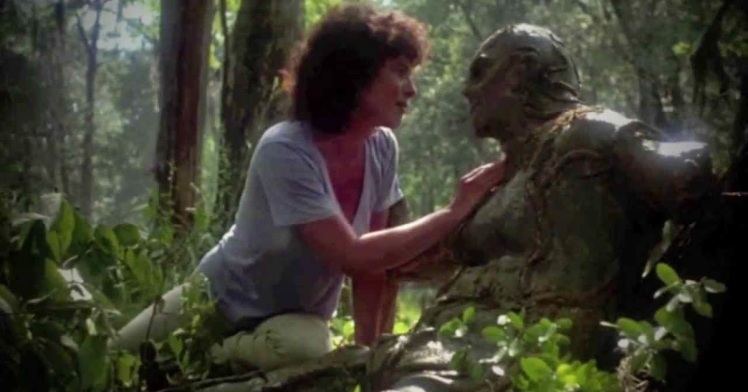 Let me take you back to 1982, a magical time in which the UK waged a meaningless war against Argentina, cinecomics didn’t dominate the box office and, above all, they were made and received with the right dose of self-awareness and irony. For example, Batman at that time was Adam West who some days just couldn’t get rid of a bomb, not Christian Bale with his hoarse voice breaking the legs of the mafia gangsters. So, in 1982 one of the many DC Comics series was Swamp Thing, on which the great Alan Moore hadn’t worked yet.

And in that same 1982 the task of making a film on Swamp Thing was entrusted to Wes Craven who in the previous ten years had made, among other things, The Last House on the Left (1972) and The Hills Have Eyes (1977). The result? Not a particularly memorable movie, but in comparison to the horrid recent films made by directors like Zack Snyder (to remain in the DC domain), at least it didn’t take itself too seriously and it focused on dialogues and characters rather than on a flood of CGI special effects. Despite the horror genre being his specialty, Craven certainly did have a great sense of humor, as he then demonstrated with the Scream saga in the nineties!

But let’s go to the film. The beautiful Alice (played by the legendary Adrienne Barbeau, who appeared in movies I already reviewed here like The Fog, 1980, Escape from New York, 1981, and Two Evil Eyes, 1990) is sent to supervise a government laboratory at a swamp. Once there, she finds (and falls in love with) Dr. Holland, played by Ray Wise who, incredibly, doesn’t play an evil character here. The villain is a billionaire named Anton Arcane played by Louis Jourdan who wants to get Holland’s results and hires a group of soldiers who indiscriminate massacre the lab workers. During the attack, the good doctor turns into… ta-dan, the swamp thing (with a remarkable stunt in which a man engulfed in flames throws himself into the swamp)!

From then on, the ex-doctor wants revenge and he gets it by saving Alice who at the beginning seemed a strong and confident woman, but in the second part of the film becomes the classic damsel in distress. But let’s be frank: Swamp Thing is an action fantasy film with a guy in a rubber costume who punches other guys and also another guy in another rubber costume. Luckily, Wes Craven knew this so he didn’t take himself seriously and made an ironic movie in which even with scenes change with effects reminding of comics pages turning. So, when I mentioned Zack Snyder before, here’s what I think: maybe, and let me stress maybe, it’s a bit ridiculous to make very serious and dark films whose protagonists go around in tight red and blue suits and punch big CGI monsters for hours.

In short, if you want to see a funny comics-style movie, give a chance to Swamp Thing. There’s even a scene in which Adrienne Barbeau bathes naked from the waist up which alone makes it worth to watch the whole (swamp) thing for the following two reasons: the cinematography and the editing. Yeah, those two. Ciao!