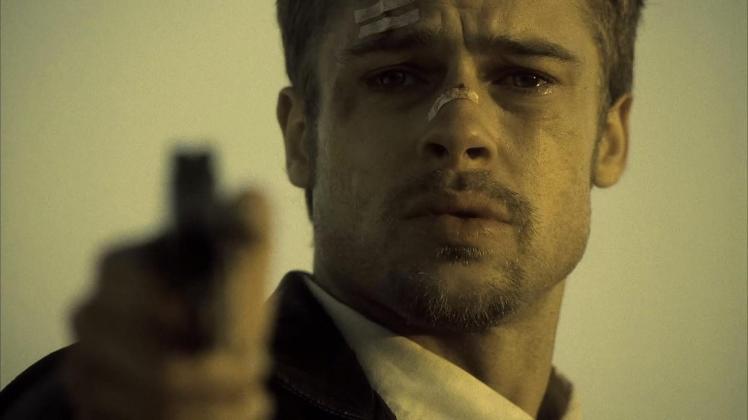 Se7en is a 1995 film directed by David Fincher starring Morgan Freeman, Brad Pitt, Gwyneth Paltrow, and Kevin Spacey. If you allow me, I’m classifying this movie as one of those of Fincher’s dark period, together with The Game (1997): I re-watched it on Bluray with an impeccable image quality, and I still have the feeling of having seen a black screen for at least an hour and forty minutes, and the movie is two hours and seven minutes long! Everyone lives in places without lights, they go to bars without lights, the weather always sucks, and even the police station is dark! But let’s leave this detail aside and let’s start with some plot.

David Mills (Brad Pitt) is new to the city. He’s a homicide detective and, let’s face it, he’s a bit of an ignorant dumb-ass who likes to make jokes to ease the tension all the time and who feels much smarter than he really is. William Somerset (Morgan Freeman) is a thoughtful and cultured detective who’s a few days away from retirement (the most used cliche in Hollywood) who has to work with young Mills. The two obviously can’t stand each other, given the clear incompatibility at all levels. However, they are forced to collaborate on a case in which a serial killer kills his victims using the seven deadly sins as motivation. And here I stop to avoid spoilers to any aliens who may have just arrived from Saturn and haven’t seen this film.

The film in my opinion is amazing: fast-paced, with imaginative murders (the special effects were made by one of the best in his field, Rob Bottin, who among other things worked on The Thing in 1982), and with exciting twists which feel shocking without cheating the audience. Howard Shore’s soundtrack is excellent (he also worked on a movie to which Se7en owes a lot: The Silence of the Lambs, 1991) and it’s enriched by some Nine Inch Nails which are always good. I’m never tired of rewatching this movie!

But since I’ve seen it several times, now I always notice two or three faults that could have been easily avoided (and from here on there are spoilers, you’ll forgive me). For example, after chasing suspect number one on foot, an injured Mills and Somerset return to his apartment door, presumably walking for at least ten, fifteen minutes. Yet only there they start arguing on the need to break into the apartment or not! If not, why did they go back in the first place? Then, it always makes me laugh that an extremely bloody John Doe (Kevin Spacey) arrives at the police station on a taxi. Did Travis Bickle give him a ride? After all, he wasn’t a choosy taxi driver!

Small flaws aside, Se7en remains a great film. The ending is devastating, very gloomy, and the contrast between the disillusioned Somerset and the young Mills open to the possibility of a better future ends in the worst possible way. Somerset was right all along! The film was made by a pessimistic Fincher (I guess the same can be said for screenwriter Andrew Kevin Walker, who also had a cameo as a corpse in the first crime scene) who shuts down any gleam of hope in the most painful way possible, even when it seems that Gwyneth Paltrow’s character may offer some. Maybe the disappointment of Alien 3 done three years earlier still hurt (curiously, in Se7en there’s Leland Orser who would then work in Alien: Resurrection in 1997)!

I conclude by saying that Se7en is a true nineties’ classic, an evil and dark detective film extremely well made and unforgettable. Definitely not to be missed, ciao!