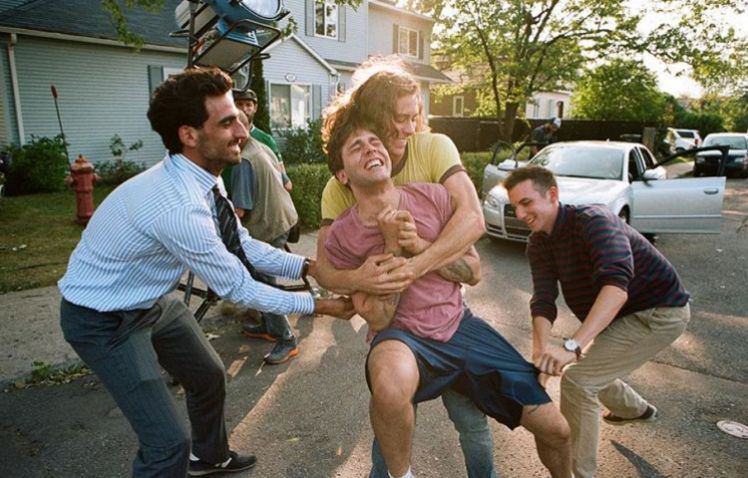 Matthias & Maxime is a 2019 film written, directed and edited by Xavier Dolan and it’s the first film I had the pleasure of seeing at the post-lockdown reopening of cinemas due to the Covid-19 pandemic. And I don’t know if it’s the effect of returning to the cinema after four months of absence, but I loved this movie!

The plot in two words is as follows. A group of friends in their thirties gather at the family house of one of them (Rivette, Pier-Luc Funk) on a lake. They must accept the presence of the not so popular sister of Rivette (Camille Felton). She’s an aspiring director and she asks for two volunteers to shoot a scene for a short film. Maxime (Xavier Dolan) volunteers, while Matthias (Gabriel D’Almeida Freitas) agrees to participate after losing a bet. The scene consists in the two kissing, and that kiss kickstarts a number of things in the lives of the two. Maxime is about to go to Australia to work, and Matthias is happily (?) married and embarked on a brilliant career as a lawyer.

The film shows us Maxime’s last days in Montreal dealing with a problematic mother (Anne Dorval) and with an unrequited love that makes him feel very bad. Little by little, we discover the world of the two as well as of their larger group of historical friends. You know, those friends who speak their own language among themselves (I loved the group quotes from The Dark Knight Rises, 2012, as well as the references to Harry Potter! When I’m with my historical friends we do similar things…) and who know everything about each other and can joke about it effortlessly.

Dolan shows us a world populated by high-class and more humble families (perhaps even in difficult situations), well-educated friends, eternal students, and workers in the most disparate sectors, but all capable of sharing good friendships despite their distances and differences.

The thing I liked the most is how no scene was wasted, all contribute to forming the mosaic of the lives of this dozen people in which in the end everyone emerges with their own personality. By the end of the movie I could swear they were my friends too! And then the actual main story is very sweet without being over-sentimental, realistic without being pedantic. In a word, it’s wonderful. Matthias & Maxime is moving, is entertaining, and makes us think of the many things we choose not to say and not to live and the consequences that these choices have on us and on those around us. The film also deals with friendship, showing how a look is enough for a friend to understand what’s wrong, and how real friends know you and accept you for what you are without judging you. And the movie also talks about love, a strong love that goes against conventions and society: even today, in 2020, in many places (including the so-called developed countries) it’s not easy to be openly homosexual: it’s not easy for the thirty-year-old guys of this film, and even less for older persons!

But the film is also about incommunicability and the difficulty of opening up. It’s easy to spend a night smoking and playing board games with friends: it’s much more difficult to sit at the table and talk about yourself, about what you feel, about emotions. Dolan deals with all these issues in a delicate way, giving us a marvelous film in which nothing is trivial and at the same time everything seems real, everything could have happened to us or to someone close to us. It impressed me so much that I now I want to see everything Xavier Dolan made before this!

The soundtrack is also remarkable, both in its original parts by Jean-Michel Blais (mostly on the piano), and in the choice of songs listened to by the protagonists and, therefore, also by us the viewers. Some choices in terms of shots and camera movements didn’t fully convince me (especially all those zooms on the faces that I found definitely superfluous). On the other hand, I liked all the more metaphorical scenes used to suggest the thoughts of the characters (such as Matthias noting the absence of a plant from his boss’ office which makes him think of the imminent absence of Maxime who’s going to Australia , to name one). In short, I highly recommend this movie! Ciao!

PS: (spoiler alert) Dolan closes the film just before the weekend in which finally Matthias and Maxime will will talk for the first time about what they feel for each other. Perfect choice, but now I would be curious to follow them there too…