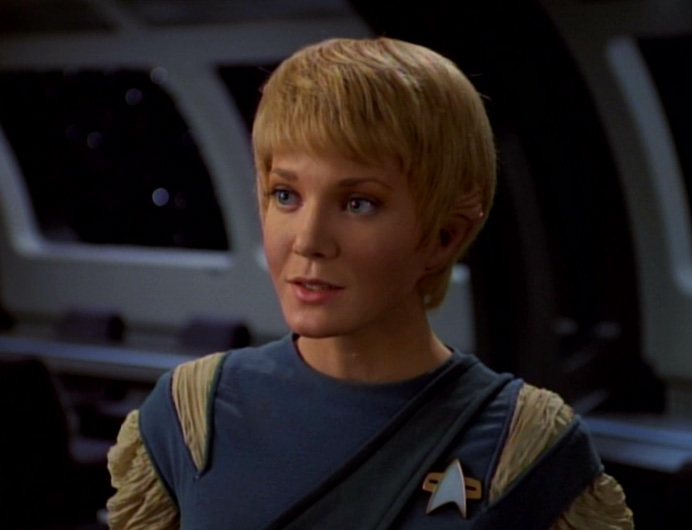 After a funny preamble in which Tuvok loses at pool despite applying logic to the game (a bit like Data losing at poker against Riker because he doesn’t understand the art of bluffing), here’s one of the toughest episodes of Voyager’s first season. Jetrel deals with the consequences of dropping atom bombs like those of Hiroshima and Nagasaki, with the limits of science, and with the difficult lives of the scientists who witnessed the terrible effects of their research applied by the military. No shit!

A Haakonian doctor called Ma’Bor Jetrel (interpreted by James Sloyan, who’s more of man of science than an actor: he also played Mora Pol in Deep Space Nine, the Bajoran scientist who first studied Odo!) contacts the USS Voyager because he’s looking for Neelix. He wants to save him from a disease he may have contracted years earlier during the war between their two races. In particular, Neelix was part of the rescue teams that went to look for survivors of an atom bomb-like device designed by Jetrel and detonated by the Haakonian army on Rinax, a moon where Neelix’s family lived. The result: 300,000 deaths in less than a second, and thousands of deaths from leukemia in the years to come. Apparently, Jetrel wants to help as many Talaxians as possible by warning them of the disease and by studying them to find a cure.

Needless to say, Neelix is ​​very hostile to Dr. Jetrel, and how could it be otherwise? Here’s one of the best scenes of the episode: Neelix confronts Jetrel, asks him how he could have conceived a device of mass destruction in the name of science, and he marvels at how he can continue to live with all those deaths on his conscience. He concludes his verbal attack by saying that there must be limits to progress. Jetrel, on the other hand, demonstrates such a love for science that he’s prepared to justify his work even after seeing what it did, at least initially. He doesn’t want to admit to being a monster, even if this is how Neelix sees him, and even though even his wife abandoned him and took their three children away for the same reason.

And as if that weren’t enough, after a while it’s revealed that Neelix is so hostile towards Jetrel because he’s ashamed of how he behaved himself during the war (even if Kes is sweet and tries to justify the Talaxian without hesitating). In attacking the scientist, he’s actually attacking himself. This is also confirmed in a classic DS9-Prophets-style dream sequence.

I found the finale a bit weak. Ok, it couldn’t have been otherwise, I understand that. After all, it was written by Americans (James Thomton, Scott Nimerfro, Jack and Karen Klein, and Kenneth Biller). And I get that Neelix actually forgives himself, more than Jetrel. But I bet that if the show had been Japanese there would have been no final forgiveness for the scientist… In any case, it’s a great episode, with a lot of interesting points to discuss. Ciao!

PS: The Delta Flyers podcast shoutout: Robert Duncan McNeill destroyed the story structure, the script and the direction of Jetrel like never before! He also remembered that this wasn’t an easy shoot for Ethan Phillips because it was a tough theme for his character but the tone remained the same from beginning to end and didn’t allow for a real character arc to be developed (and apparently Kim Friedman’s direction wasn’t helpful).