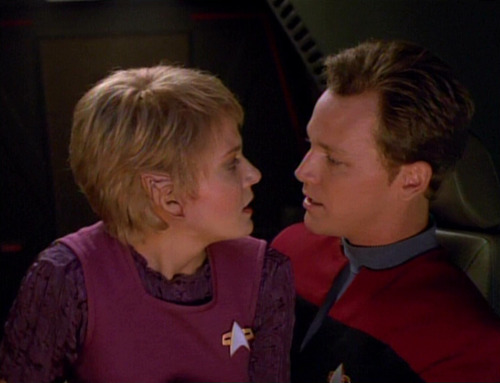 Season 2 really is a slow burn. This seventh episode is another bad one, and the plot could fit any sitcom taking place in a New York flat… It’s about jealousy! Unfortunately, Star Trek: Voyager doesn’t treat the theme in an intriguing way like, for example, The Next Generation’s Eye of the Beholder (Season 7). And don’t even get me started on how Deep Space Nine developed the jealousy theme with Odo loving Kira for years before finding the courage to confess how he felt about her!

Here’s the plot of Parturition. Quite simply, Neelix’s jealousy of Tom Paris has increased so much that it finally bursts. Clearly, the handsome Paris is in love with Kes and although he hasn’t done anything make her betray the Talaxian, the latter has no intention of watching it happen. There’s even a ridicolous bar fight complete with tomato pasta squashed on Paris’s uniform. Shortly thereafter, Neelix and Paris must go on a mission together and they understand that conflict leads nowhere, they collaborate, they apologize to each other, and they become friends. End of the episode.

Meanwhile, the USS Voyager loses another shuttle (another one was disintegrated not too long ago, in Initiations)! And is it a Delta quadrant’s rule for the teleport never to work on any of the planets visited by the ship? But there are also some good things in the episode: for example, Janeway is quick in ordering Tom Paris and Neelix to solve their problems. I like how she handled this issue because she treated them as adults, relying on their intelligence and ability to assess the peculiar situation in which they find themselves, that is, lost and forced to live together on a small ship.

That’s all, as far as the positives are concerned… Even though the legendary Jonathan Frakes (William T. Riker, of course) directed Parturition, there was little he could do to save an episode written with so little creativity. His expert touch can be seen in Voyager’s space battle scenes with an unidentified vessel (I haven’t given you many plot details but, trust me, you aren’t missing much), but there’s a limit to what the beloved bearded commander can do with such low quality material. So on to the next episode, ciao!

PS: in this episode, Neelix said out loud “technobabble“!!! It cannot be said that Star Trek is not self-deprecating.

PPS: The Delta Flyers podcast shout out: after Robert Beltran for Initiations, here’s Ethan Phillips as a guest star! It’s fun to hear his memories on the good old days of filming Star Trek: Voyager! And there’s no shortage of praise for Frakes for making the mock caverns of Paramount’s stage 16 sets look much bigger than they actually were!

Next episode: Persistence of Vision