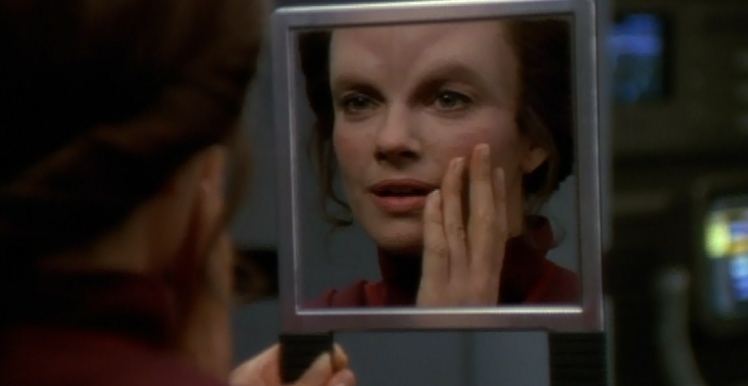 And here’s the third appearance of the Vidiians, the first in the second season, some excellent villains whose concept was also used for the Son’a race in Star Trek: Insurrection (the 1998 film directed by Jonathan Frakes). But this time things are very different: contrary to what happened in Phage and in Faces, in Lifesigns there’s no terror, no fear. There’s a love story instead! The USS Voyager responds to a request for help from a Vidiian ship and teleports aboard a woman a phage-induced coma (the phage is the disease that has ravaged the Vidiians for centuries). And here comes the Doctor who, thanks to a pre-existing bio-neural implant in the Vidiian woman’s head, creates a holographic image with which to interact while keeping her body in stasis.

We discover that she is a doctor, Danara Pel (played by Susan Diol) and as she works with the Doctor to find a method to stabilize her health conditions using B’Elanna Torres’ Klingon DNA, a beautiful relationship develops between the two which quickly enters the domain of affection / infatuation / love. But the great thing here is that the Doctor has no prior experience about it, so prepare for a number of ironic, and at the same time sweet, situations. The episode develops this story perfectly and manages to deliver a credible love story, something surprising in itself. I’m thinking of other Star Trek disposable love stories such as Booby Trap, Season 3 of The Next Generation, in which Geordi LaForge falls in love with the hologram of an engineer who worked on the warp engine of the Enterprise, or Sub Rosa, Season 7 of TNG, in which Beverly Crusher falls in love with a ghost.

Unlike most of these intense love stories that last one episode, the Lifesigns one works great. Perhaps helped by the fact that the protagonists are both holograms, everything is credible from start to finish. Then, the Doctor is by far the best character in the series (Robert Picardo is immense), so having him at the center of the plot is always a great choice. Plus, the episode also deals with the issues of euthanasia and aggressive medical treatment in a non-trivial way, even if on the latter it gives a somewhat hasty response. It’s so hasty that the ending seems premature: I almost expected this to be a two-part story!

However, this is great Trek. The dance scene in the holodeck with the Doctor and non-holographic Danara is moving, not to mention the beautiful message behind it. This is the Star Trek we love! Ciao!

PS: The fights between Tom Paris and Chakotay continue (like in Meld and in Dreadnought), and at this point I’ve no doubt that this will lead to something big! Not to mention Ensign Jonas who keeps sending information to Seska and her Kazons, I expect a great season finale!