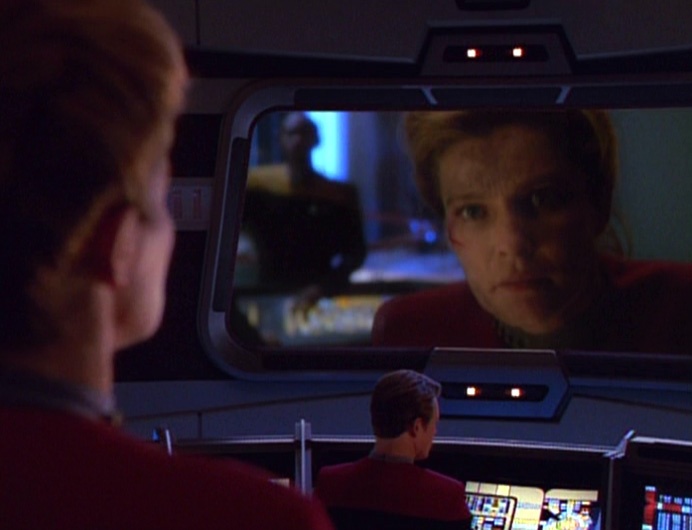 After the disappointing conclusion of the longest story arc developed so far in Star Trek: Voyager (see Investigations), here’s a great, compelling, well thought out and well made episode! Deadlock surely relies on a huge technobabble, but it manages to excite and brings home a story full of amazing twists. The trick of duplicating the most unfortunate starship in the Universe this time really works (unlike in Parallax and Phage), plus the Vidiians are back (after the recent Faces)!

Everything starts with yet another episode of Voyager enters into things. This time, it’s Tom Paris taking the initiative (the last time it was Tuvok in Elogium), but at least there’s a valid reason: a fleet of Vidiian ships must be avoided at all costs! So, just as Ensign Samantha Wildman (Nancy Hower) is finally giving birth, Voyager enters a plasma concentration which hides the ship but… completely blocks it too! Apparently, all the anti-matter of the engines disappears, and B’Elanna Torres can’t even guess why. Shortly afterwards, random proton discharges begin to hit the ship causing enormous damage, the infirmary fills with wounded crewmen and… I stop here to avoid spoilers for those who have not seen the episode. The advice of course is to watch it, this is the series at its best! If you continue reading, be aware that I’ll reveal more about the plot.

After a while, it is discovered that there’s another Voyager trapped in the plasma concentration, but it’s completely intact and it occupies the same space of the Voyager that we had followed from the beginning. The theory is that a quantum field has doubled matter but not anti-matter, so now there are two ships but both without engine power. Unfortunately, one is damaged by the actions of the other! Not only is the explanation ingenious, but the twists and turns follow one another relentlessly: Wildman’s son, Harry Kim getting lost again (after all, it’s a habit: the last time it happened in Non Sequitur), Kes disappearing, the arrival of the Vidiians…

Everything works here. And seeing two Janeways arguing with each other is more fun than I thought! In short, it’s not the first time that Star Trek plays with doubles, think of the Mirror Universe and Spock with a goatee (or Kira Neris as an evil dictator in Deep Space Nine), or Thomas Riker created in a teleportation accident (Second chances, sixth season of The Next Generation). Well, Deadlock rightfully takes its place among the best examples of this sub-genre. Janeway also manages to blow up her own ship as she always seems to be eager to do! Seriously, this is a great episode that leaves aside messages and deep themes and goes at full speed into science fiction territory and succeeds completely! Ciao!

PS: The Delta Flyers podcast shout out: It’s always fun to listen to Robert Duncan McNeill and Garrett Wang getting excited about the actions of their characters. This time, they almost convinced me that Harry Kim is the only real Voyager character who survives at the end of the episodes, all the others, including the ship, are mere copies!