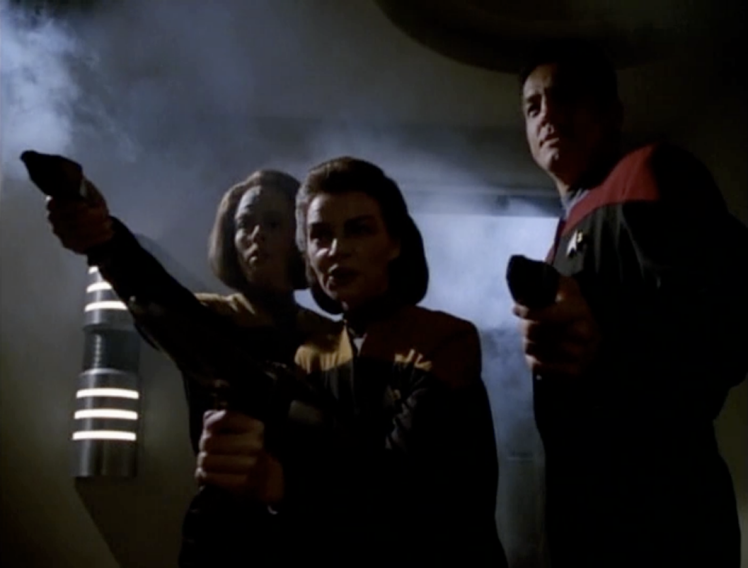 Someone woke up a little late and thought: “We didn’t do much with the Federation and Maquis crews forced to live together, right? We could have played the whole thing very differently…”

Only that doing one of those things at the end of Season 3 requires the use of the holodeck, which implies that the strength of the episode is drastically reduced by the fact that now, and for quite some time, the Federation / Maquis is practically non-existing.

For example, the beginning of Worst Case Scenario would’ve been powerful in the middle of the first season, with Chakotay conspiring with B’Elanna, but now… you quickly realize that it’s just a simulation. It must be said that this is intentional: Chakotay taking the lead for the first time? B’Elanna is an ensign? The writing of this first part is actually very intelligent and pays attention to small details, so it’s clear that the writers were aware that the trick couldn’t really work in the third season, so there’s not even an attempt to deceive the viewer! Furthermore, Chakotay’s criticisms of Janeway’s work in Caretaker… it makes sense!

Unfortunately, however, the idea that many of the crew are having fun in the holodeck simulating a mutiny aboard the Voyager is nice, but not enough to sustain an entire episode. Thus, after twenty-five minutes, here comes the cliché “The security protocols in the holodeck are off and we can die for real” with Tuvok and Tom Paris risking to be killed by a simulated Seska which is simply an excuse to get back the good Martha Hackett on set one last (?) time.

The intent here is pure entertainment, there are no underlying messages nor important topics to deal with, and if you are a fan of the holodeck room and its legendary malfunctions, you will surely have fun.

As for me, I remember better episodes based on this narrative gimmick (such as TNG’s Future Imperfect and the pair Elementary, Dear Data and Ship in a Bottle, and DS9’s It’s Only a Paper Moon), but I’m not a big fan anyway, and this Worst Case Scenario didn’t particularly impress me. Initially I had some fun, and then I found it a bit too convoluted to work, at least for me! Ciao!

PS: fun fact, even though the holodeck first appeared in The Next Generation, the idea came to Roddenberry for the third season of The Original Series. It didn’t materialize back then, but in its ideal sequel (Star Trek: The Animated Series), with the name of Recreation Room.

PPS: The Delta Flyers podcast shout out: this is a wonderful podcast episode featuring Martha Hackett as a special guest star! It was also funny to hear Robert Duncan McNeill complain about how Worst Case Scenario was used by the writers (Kenneth Biller above all) to make fun of the actors who asked for constant changes to the dialogues of their characters!