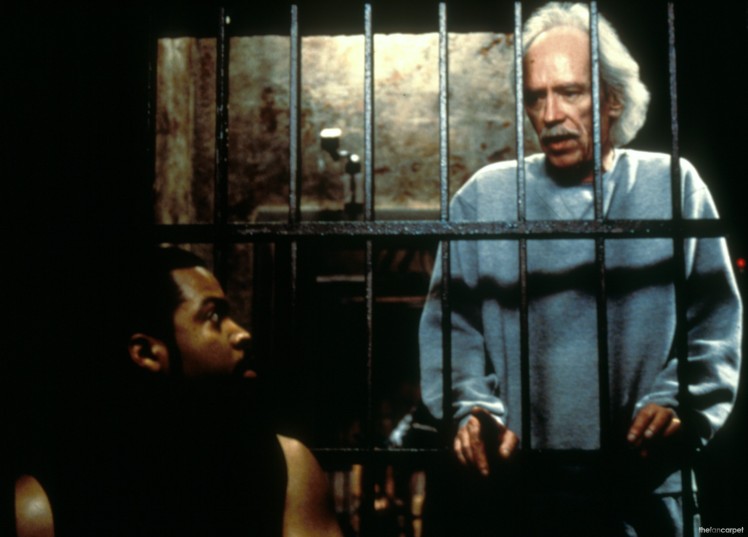 Ghosts of Mars is currently John Carpenter’s penultimate film. It came out in 2001, when the American director was just 53 years old, and it was so badly received that he practically retired from the scene and didn’t direct anyt other movie for nine years (when he made The Ward, 2010). But is Ghosts of Mars really that bad? No, not in the slightest, and here I’ll try to briefly explain why.

The idea of ​​the film came from the desire to make a trilogy on Snake Plissken, the protagonist of Escape from New York (1981) played by Kurt Russell. Except that apparently no one liked the sequel, Escape from Los Angeles (1998), so here’s a change of subject that leads from Escape from Mars to Ghosts of Mars, which in the end it’s almost a remake of Assault on Precinct 13 (1976). By the way, I personally see a little bit of all Carpenter’s movies in Ghosts of Mars, but for the moment this is sufficient to introduce the movie, I guess.

So let’s get to the plot: in 2176, Mars is almost entirely terraformed and it’s governed by a matriarchy. Lieutenant Melanie Ballard (Natasha Henstridge) is part of a security team led by Helena Braddock (the legendary Pam Grier) who must retrieve a dangerous prisoner, “Desolation” Williams (did you get it? He’s futuristic “Napoleon” Wilson), played by Ice Cube. And here’s a problem: while Darwin Joston was perfect to play a convicted murderer in the 1978 Carpenter film, plumpy Ice Cube is far from credible in that role. In fact, Carpenter wanted Jason Statham to play “Desolation”, but the producers wanted a higher caliber star (at the time Statham was only known for a couple of films with Guy Ritchie: at the end, his role is simply that of one of the team, the horny one). Too bad, the film would have gained if the producers had not intruded, which by the way is almost always true! But let’s get back to the plot.

Once at destination, our heroes find out that something has gone terribly wrong, although Williams has nothing to do with it. The colonists have awakened presences able to possess human bodies and use them to perpetrate the most vicious acts of violence. And now the unlikely group formed by policemen and criminals (Williams is not the only one) must survive in a truly Carpenterian situation. That’s why I see the whole filmography of the Master of Horror in this movie: a strange fog is responsible for the colonists’ possession (see The Fog, 1980); the villains are similar to those of Assault on Precinct 13 and Prince of Darkness (1987), but they are controlled by a sort of Valek from Vampires (1997); the story is told in flashback like that of Memoirs of an Invisible Man (1992), in this case by Melanie who’s questioned by her superiors… and so on and so forth.

This means that the movie reiterates all the messages dear to the American director: he doesn’t trust the authorities, he believes that our society is on the brink of collapse (or has it collapsed already?), and most of all he doesn’t believe in heroes! Also, there are no bad guys, there are just two factions fighting each other: who are the good ones? The colonists who invaded Mars with their armed security personnel, or the spirits of the ancient inhabitants of the place?

Besides that, Ghosts of Mars is an entertaining film and Carpenter made it to have fun himself: there are many gory action scenes, over the top dialogues, an amazing metal/rock soundtrack (in the Bluray special contents, I enjoyed seeing John having his songs played by musicians such as Steve Vai, Buckethead and Anthrax!), a chilling ending with the hero and the anti-hero joining forces to survive (in fact they are two anti-heroes, since Melanie has a certain dark side)…

In short, this movie works for me. Ice Cube is the element that works the least (and I read that in interviews following the release of the film he regretted working with John Carpenter, how dare he?), but if you take everything as a fun ride, which was the intention of the director, in my opinion it’s impossible not to have fun. John Carpenter himself said something like: “It’s called Ghosts of Mars, who thought it was to be taken seriously?“! I always enjoy rewatching this movie, I’m happy to have it in Bluray, and I praise it even though I know that there are very few estimators of it out there. Ciao!