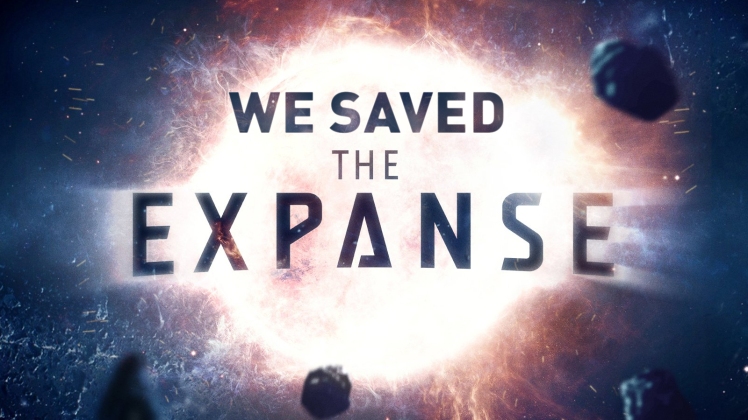 The Expanse is the best series you are not watching!

Of course your friends are all telling you that for their favorite series-of-the-moment in these times of over-abundance of “content”. But I will try to convince you.

The Expanse is the best space science fiction on TV since Ron Moore’s Battlestar Galactica and, since they actually have a plan of where the story is going, perhaps since the 1990s’ Babylon 5. The Expanse is an adaptation of a series of books that’s currently finishing publication, a copious series of 9 books (which I haven’t read). Initially it is a tale spun from two friends discussing a role playing game — essentially the duo of writers are the game masters and we are the players — and in a nice twist of fate, because of the success of books and TV series, The Expanse is being adapted back into an actual RPG! So it is an on-going tale where story developments and twists and characters and themes are added on top of each other as the tale is further spun. 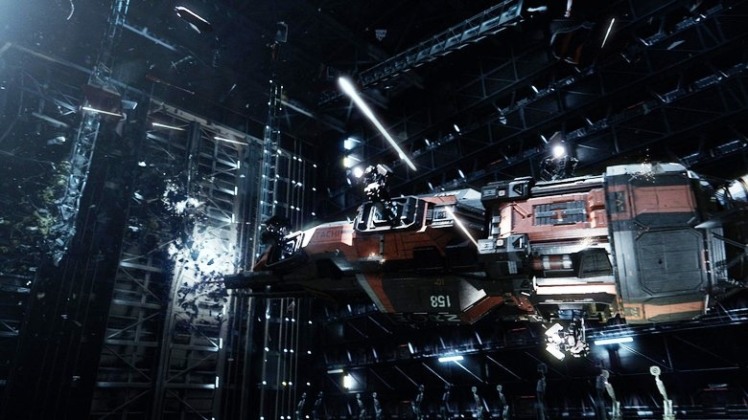 The Expanse‘s success comes from marrying two strands of science fiction: the literary and the blockbuster.

By literary I mean: the science must be respected! Too many on-screen SF, in their attempt to do SF, actually do some kind of space fantasy where it is okay to bend the rules of how the world works because outer space is such an alien environment to begin with. But there are so many amazing stories to be told within the real world, stories about how humanity would actually develop in the solar system, without all that faster-than-light, teleportation, anti-gravity, humanoid aliens crap. And it’s not only about strictly science, it’s about the stories that can be told within these constraints of reality. What kind of economic effort is needed to colonize the solar system? How does people’s relationship with the environment and natural resources and outlook on the purpose of life change? What kind of societies develop if Earth is so remote, what type of inter-personal relationships and personal freedoms or totalitarianisms? Up until now this type of SF has existed almost exclusively on paper (Kim Stanley Robinson’s Mars trilogy or 2312, to take one excellent example).

Strictly respecting the science is also super cool for anyone that actually pays attention! Gravity when there is spacecraft acceleration, and mid-journey flip to start deceleration. Magnetic boots when there is no gravity. Coriolis force in rotating asteroids. Birds flap their wings less in low gravity. Dreams of the centuries-long process of terraforming Mars. Space stations at places in the solar system that, you know, actually exist — Ceres, Phoebe, Ganymede — which pushes you to learn more about the reality of our neighbourhood. Mirrors to provide extra sunlight in remote planets and grow plants. Weaker bones for humans grown on lower gravity. An orgasmic scene of serial gravity slingshots using many of Jupiter’s moons. Debris that travel so fast that they pierce ship hulls and create vacuum. Higher sea level because of global warming and dams to protect Manhattan from flooding. Water rationing and more vegan-based diet on more resource-scarce parts of the solar system. So many examples! The only aspect that would seem more advanced is the propulsion technology, much more powerful and efficient than our rockets, but it is based on concepts that are being developed since the 1970s (nuclear fusion with electromagnetic directional nozzle).

The Expanse also does excellent world-building. It presents a world that realistically appears lived-in, lively and chaotic and organized differently from today. There are people being nationalistic about Earth as a whole (let alone individual countries or groups of countries like the EU), waving the UN flag and chanting pro-Earth slogans. LGBT is so well respected that even high-ranking officials like ambassadors from Mars can be openly gay without being frowned upon. Punk haircuts, tattoos all over, all kinds of dressing are everywhere. With so many strong and memorable female roles there’s absolutely no hint of sexism that is often associated with action films and military SF, and the series has been praised for how diverse the cast/characters is, in gender, race and sexual orientation. Names show how truly a global blend humanity has become. I love “Naomi Nagata”, a Japanese name for a black Brit actor that has half her head shaved and has tattoos from an underground anarchy-inspired organization! Spaceship names too are awesome: as foreboding as the Anubis, or as poetic as the Weeping Somnambulist, or as foreign as the Guanshiyin. A family can be eight adults of both sexes and children can be a mix of all their genes. Remote places have developed their own creole or patois (see glossary here, beratna!). Futuristic smartphones are not shiny and people don’t spend time being amazed at how shiny they are: like today, they are just objects, tossed around and with broken screens. Again, so many examples and an insane amount of detail for example on display screens, which make watching and re-watching the series addictive! The fact that episodes are a short-ish 42 minutes helps binge re-watching, and the story is so serialized that it is difficult to distinguish between episodes (which, arguably, is not such a good thing, but it is characteristic of series of the 2010s). With all the special effects, there’s no way such a series could have been done on such a small budget even ten years ago, times are changing. 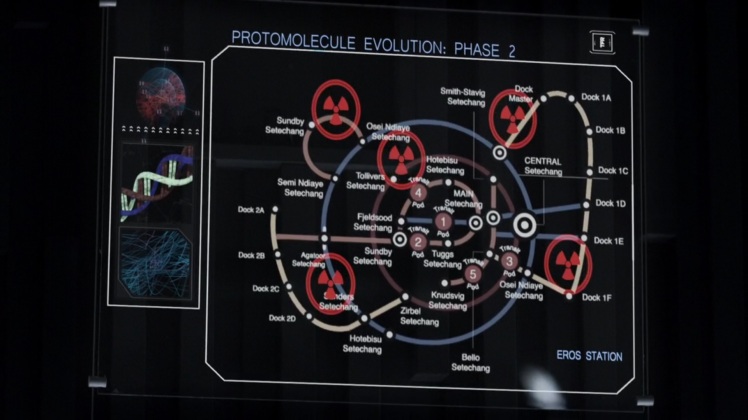 And then there’s the blockbuster aspect. The Expanse is a product of its time, the 2010s decade. The tempo is fast, the editing is fast, the atmosphere is tense, the music is often that electronic beat like a countdown clock, there are cliffhangers all the time. There are few calm moments but they do stand out: scenes where characters just sit down and have a drink, fleetingly revealing something about their past, or share a meal of vegan lasagna, or relish a coffee alone, are among the show’s most memorable. But for most of its duration, The Expanse is unrelenting tension and action. It even gives rise to some of the series’ most memorable or tragic moments, like self-sacrifice when is not possible to take on-board everyone in a rescue, or the fast editing showing how unforgiving outer space can be as an environment, or showcasing many of the science examples above. It is very good action for most part, there’s no need to be intellectually snob about it. Yes there’s a lot of direction with a moving camera and there’s a lot of gunfights. Indeed there are examples where it can be too Hollywood or when character decisions are shoehorned in and although their decisions do make sense, spending more time on them would make things subtler and more relatable. In fact, there’s a lot of character development going on, it’s just that the series is quite compressed and fast-paced and it takes some effort to do the unpacking, but that is part of the addiction. At times one would prefer to spend more time developing the characters more or have some more tension-relieving humor instead of advancing the relentless plot (in this sense, its RPG roots show).

It could be said that The Expanse is actually not innovating much, it’s kitchen-sink SF. It’s doing — very well — what SF books have been doing for decades, the difference being that on-screen SF is always and systematically decades behind SF literature. It doesn’t have a specific world-view or ideology that makes it readily identifiable: it doesn’t sink into a full dystopia like Black Mirror, it doesn’t promise a full utopia like Star Trek, it doesn’t present spirituality-searching paranoia like The X-Files, it doesn’t copy/paste today’s world to tomorrow like Futurama. It has elements of all of these, showing humanity still struggling with class, privilege, self-interest, community and belonging, technology, meaning, but in a new context, in short doing what good science fiction (also) does.

So if it’s so good how come have you barely heard of it? This is where the story gets interesting, and where fans get very emotional and supportive!

The Expanse also comes at a time, the late 2010s, when television series…is no longer television, really. Streaming and VOD is more and more the norm, which changes the way that productions sell their product to distributors, and who those distributors are, and who the actual owner of the production is. The Expanse, like many shows now, is owned entirely by its production company, Alcon, which then tries to find buyers and come to an agreement on how exclusive the distribution is to that buyer. For two seasons, The Expanse suffered from a deal with the subscription channel Syfy in the USA, where it could only air once, as Alcon was trying to get a better deal with a larger distributor; outside of the USA, Netflix acquired the first two seasons on cheap, with one year delay, but as most buzz about TV, let’s be frank, is created in the USA, hardly anyone was watching, and one year later anybody a little bit interested has already pirated the series a long time ago. Syfy, which also had little return on its purchase, decided not to extend its deal beyond season 3, which also aired once in the USA; US citizens could then buy the BluRay if they wanted to see season 3 (and BluRays are region-protected). With Netflix still not having purchased season 3, the only way for the rest of the world to see season 3 was to do illegal things. Alcon cancelled the series and sets started being torn down.

The fan campaign that then followed is something, I believe, unprecedented. People did videos speaking Belter creole. Planes flew over the Amazon headquarters with #SaveTheExpanse banners. Models of the spaceship Rocinante were actually flown to low Earth orbit. Fan editors did a better job at advertising the series than professionals. DIY merchandise was made, from cosplay suits and coffee mugs to open-source graphics and 3D models of spaceships, sometimes using the same schematics that were developed for the show itself. Fans did plenty of videos and podcasts with cast and writers and producers hoping for a continuation, and everyone was very accessible in the age of social media. All the while season 3 was first airing little-watched but well-reviewed episodes! When something like this happens, it further reinforces a fan base and makes it willing to defend their favourite series against all odds (see the fans of Firefly for instance). And then, appropriately during a conference on manned space flight, Jeff Bezos himself announced that Amazon had acquired rights for all the series and was financing season 4. (Making The Expanse Amazon’s big SF series, while it develops its big Fantasy series set in Middle Earth?) Truly, the #SaveTheExpanse fan campaign had saved The Expanse! It’s true, you have to get an Amazon Prime Video subscription and sell your soul to the anti-workers rights behemoth belonging to a multi-billionaire in order to see The Expanse, but well that’s what my choice has been. And so in February 2019, The Expanse premiered worldwide with all 3 seasons and with season 4 to air sometime in the second half of the year.

Being part of the fandom has become a big part of experiencing the show, with lines from the dialogue that have become cult. Now enough with generic unspoilerific sentences. It’s time to get into the story itself, in a second post!

6 risposte a "The Expanse: An Introduction"