Wes Craven has been one of the most important horror directors of the last 50 years. In the Seventies he had a fairly good success with his debut feature The Last House On The Left (1972), shot almost at no cost, and especially with The Hills Have Eyes (1977): both these movies are considered classics of the horror genre. But Craven really became extremely popular in the Eighties thanks to A Nightmare On Elm Street (1984)! Not only did he give us an iconic villain like Freddy Krueger, but that movie spurred an endless series of sequels whose quality, let me add, went down rapidly.

The Scream saga is a fantastic gift that Wes Craven made to horror cinema before dying, poor guy, in 2015. Why am I saying this? Because each Scream is at the same time a tribute and a perfect example of the classic horror/slasher film. The first establishes the character of the survivor, Sidney Prescott (Neve Campbell), and launches a villain that has now entered modern pop culture: Ghostface. The second uses all the clichés pertaining to the typical sequel of this type of film. The third is the perfect closure of a trilogy of terror, and the fourth is a manual on how to make a reboot/soft remake fifteen years after the first movie was released. You can tell that Wes Craven was a real master as he did all this by creating excellent horror films without being afraid to use humor and self-referential messages everywhere in his films (with a lot of surviving rules spoken aloud as if it were a film class).

Another feature that makes the Scream saga unique is that both the director and the main actors don’t change from one film to another, something rarely (never?) seen before (just think about the various Halloween, Friday 13th or Saw, for example). And then it’s incredible how watching the four films one after the other doesn’t feel heavy at all, despite the fact that they are (overtly!) based on well-established clichés. The only  thing that doesn’t help making this saga a timeless classic is perhaps the soundtrack, as the typical Nineties’ rock music makes the first three movies a bit dated, if seen today. But these are but minor details… and now let’s talk about these movies!

The first film of the saga is fantastic. The great initial scene with the talented Drew Barrymore, masterfully directed by Wes Craven, makes the viewer enter the great world of an amazing slasher. Ghostface is really scary, both when he’s seen on screen and through his voice on the phone. Sidney Prescott is a character which attracts our sympathy right from the beginning, and all the secondary characters are also memorable. The treacherous Gale Weathers (played by Courteney Cox, who desperately wanted to differentiate herself from her FRIENDS character), the clumsy Dewey (David Arquette), the cinephile Randy (Jamie Kennedy), the boyfriend Billy (Skeet Ulrich)… they are all well-characterized and excellent characters which give life to Woodsboro, the fictional village upset by the terrible crimes of Ghostface.

The film is full of references to other horror classics, above all John Carpenter’s Halloween (1978): you can hear Don’t fear the reaper by the Blue Öyster Cult, Billy’s surname is Loomis like Donald Pleasence’s character, and even the the director’s name is spoken out loud by one of the movie characters, even if mixed with that of Craven (Wes Carpenter!). And the surviving rules are practically all based on Halloween (which of course is the first modern slasher): if you have sex, you die; if you say “I’ll be right back”,you die… But all this reminds me: have I told you that I met John Carpenter? X-D

Scream was a great success. And so, inevitably… 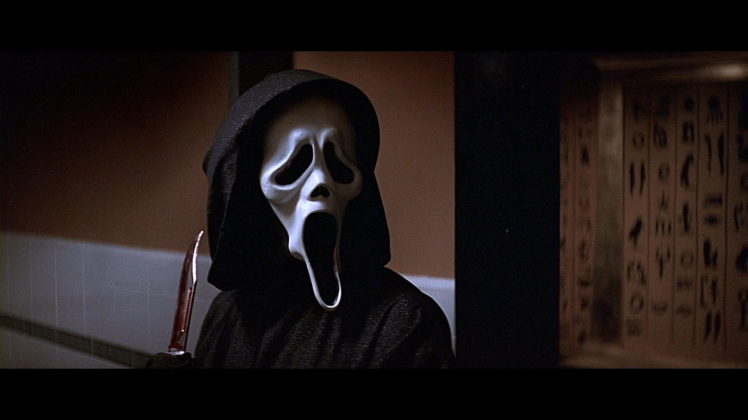 Incredibly for a horror sequel, Scream 2 manages to respect all the sequel clichés without being worse than the original (which is usually the case). The main actors are once again fantastic, Wes Craven clearly enjoyed himself in directing this film filled with the right amount of jumpscares and unexpected camera movements. The plot is good too. Once again there are tons of film references (Aliens, The Godfather, Showgirls…) and there are a few rules spoken out loud: in the sequel there must be more deaths and more blood than in the original, a woman must be the key to solving the mystery…

And while respecting all these well-known and overused rules… Scream 2 works like clockwork! The film is scary and at the same time it entertains thanks to its characters so well written and well interpreted. Craven even allows himself the luxury of putting an actress in the film, Tori Spelling, just to refer to a line said by Sidney Prescott in the previous film! And how can he do that? The novelty introduced by Scream 2 is Stab: the movie within the movie about the crimes of Ghostface! This allows Wes Craven to continue developing his thoughts about multiple overlapping and intertwined narrative levels overlapping as he already did in his A Nightmare On Elm Street (here it’s a movie within a movie, in the Nightmare movie the use of dreams allowed a similar narrative style). Not to mention the commentary on violence in movies that inspires violence in the real world, or vice versa!

And after such a successful work it wouldn’t make sense to stop, wouldn’t it? 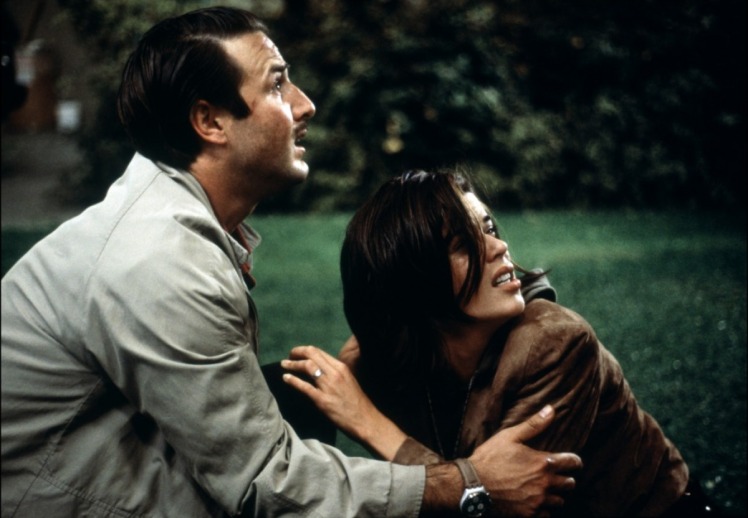 And with this one the saga starts to work less well, maybe… Mind you: the formula didn’t change! In the third movie once again Wes Craven talks about cinema, tells the viewer a number of rules (this time those to be used to close a trilogy, with the murderer being revealed as a superhuman being), and the characters are the usual ones. But I must admit that the formula begins to feel a bit tiresome. Among other things, we see very little of Sidney, and basically the protagonists this time are Dewey and Gale.

But the real problem of the film, in my opinion, is its senseless desire not to make it clear who is behind the Ghostface mask this time. This was something that was already present in the second film, and in fact there were many script changes during the filming of the movie to ensure that the ending wasn’t spoiled before its release, but this time the film suffers because of this choice of making everyone a suspect. Right from the beginning everyone, and I mean EVERYONE (wow, I’m quoting Léon The Professional here!), acts suspiciously. So much so that the final resolution feels meaningless, it’s not exciting, and the “explanations” are futile because they aren’t credible. They feel made up at the last minute. Basically, anyone could have been the killer, so no single choice can be satisfactory. The strength of the ending of this Scream 3 is not even close to that of the previous two movies of the saga, despite Wes Craven being aware of this problem and toying with it for the whole movie!

Let me add that this movie features a great cameo by Carrie Fisher playing a character that everyone mistakenly takes for… Carrie Fisher! It doesn’t get more meta than this…

And at this point, inevitable, here comes the reboot. 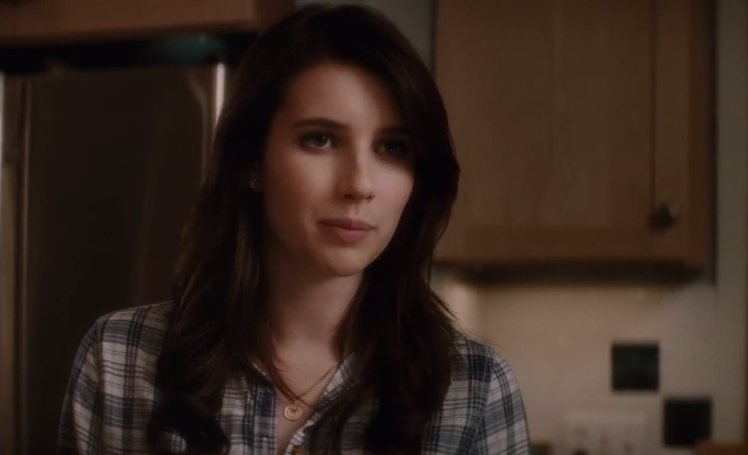 And unfortunately this didn’t work for me. First of all, after watching the four movies in a row, the first thing that caught my attention is the HORRENDOUS cinematography of this fourth film. Eleven years had passed since the previous one, and (unfortunately) the cinema had gone digital in the meanwhile. Of course there are films shot in digital with a good cinematography (think of Michael Mann, above all), but here the difference with the previous movies is huge. What a pity.

And then the film drags a bit. The soft reboot formula, with actors playing actors filming the Scream movie is fun, but we’ve already seen it, Wes Craven has already used it. Ghostface killing people with a knife in the fourth film no longer surprises us. And the idiotic explanations behind homicides committed by psychopaths in Woodsboro now come out as too repetitive .

In short: Wes Craven didn’t do anything wrong with this movie, except that perhaps he could’ve stopped after the trilogy. Personally, at the end of the third Scream I had obtained everything the saga could give me, and I found this fourth film redundant (although it’s worth seeing it even if just for the reference to Shaun Of The Dead by the great Edgar Wright!). And I read that it the plan was to make this one the first of a new trilogy, something that didn’t materialize just because of the director’s death. I don’t think I would have gone to the cinema to watch Scream 5, let me admit it.

But I can only congratulate a director who has given so much to the horror genre including, I think, the best horror saga ever, even if with a fourth chapter of lower quality than the previous ones. Thanks, Wes Craven.